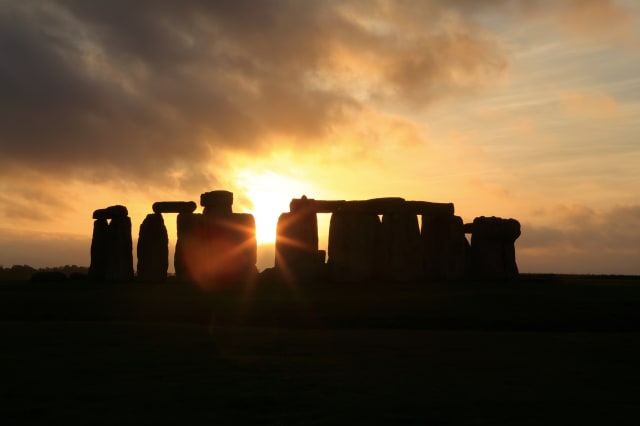 The builders of Stonehenge feasted on pigs and cattle transported from as far away as north-east Scotland, a new exhibition at the Neolithic site shows.

Milk also played an important symbolic role in feasting ceremonies held by the prehistoric community who built the monument 4,500 years ago, but as they were lactose intolerant they had to turn milk into cheese and yogurt to eat it, experts said.

SEE ALSO: Building Stonehenge was easier than we thought...

Highlights from the Feast! Food at Stonehenge exhibition include the skull of an aurochs, an extinct species of wild cattle with huge horns and a rare complete Bronze cauldron dating from 700BC, which would have formed a centrepiece of feasts.

The exhibition at Stonehenge, which allows visitors to find out about the diet and lifestyle of people who built and used it, also features a nearly complete and beautifully decorated grooved ware pot used in the preparation of pork and beef dishes.

The displays reveal research and stories from the "feeding Stonehenge" project, which has been exploring the lives of the people who lived at the nearby settlement of Durrington Walls, in the late Neolithic period, English Heritage said.

Thousands of discarded animal bones and teeth excavated at Durrington Walls suggest it was not a typical village but a site of major feasting and ceremony, at which large amounts of beef and pork were eaten.

Isotope analysis of the pig and cattle teeth reveal people were bringing some of the animals from as far as 500 miles away, suggesting Stonehenge was known across Britain and people journeyed to help build the monument and take part in feasts.

The dairy pots were found concentrated at a timber ceremonial circle at Durrington Walls, suggesting milk played an important and symbolic role, though people had to turn it into low-lactose products such as yogurt or cheese to eat it.

"Raising the ancient stones was an incredible feat but so too was feeding the army of builders – our exhibition reveals just how this was done."

Britain's 10 best landmarks (according to TripAdvisor)

York Minster is one of the largest cathedrals of its kind in Europe and was built in 1338. The Gothic building is the seat of the Archbishop of York and is known for its striking architecture and the great east window.

With a history that dates back almost 1000 years, it's not surprising that Windsor Castle is the oldest occupied castle in the world as well as being the official residence of the Queen of England.
Buckingham Palace is the official workplace of the royal family and the London residence of the Queen. It was originally built as a large townhouse in 1703. It was bought by King George III and then enlarged in the 19th Century.
Tower Bridge is one of the most iconic sights in London and can be found bridging the Thames alongside the Tower of London. The bridge also recently unveiled a glass floor walkway 42 metres above the river granting visitors a spectacular view.
Westminster Abbey is one of the most well known religious buildings in the whole of the UK and has hosted a number of Royal weddings, coronations and burials.

Parliament is open to all visitors from the UK and oversees and everyone is welcome to attend the debates and watch the committee hearings that take place there.

Big Ben is generally regarded as the name given to the entire clocktower although it was originally the name attributed just to the bell. The tower was completed in 1859 and rises to nearly 100 metres, making it one of the most well-known buildings on the London skyline.

Britannia was first launched from a shipyard in Clydebank in April 1953 and served the Royal Family for over 44 years and travelled more than a million miles. The yacht is now berthed at Leith, Edinburgh and open for visitors to enjoy.
The iconic Edinburgh Castle overlooks the Scottish capital from its rocky plinth high above Edinburgh and has been home to many Scottish monarchs over the years including Mary Queen of Scots. while visiting the castle you'll have the chance to explore the National War museum, Scottish crown jewels and much more.
This historic Tower of London can be found on the bank of the Thames and although monarchs no longer live in the palace, the crown jewels are housed here and therefore the tower remains a significant part of London and the royal family.
Up Next