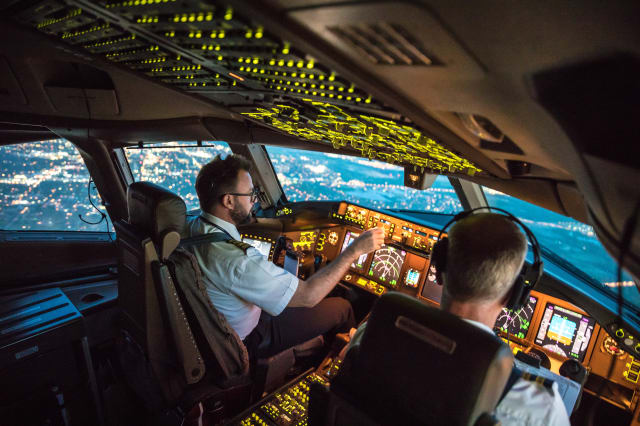 Airline pilots are banned from chit-chat during take-off and landing because of a little-known rule.

The Sterile Cockpit Rule requires pilots to avoid non-essential conversations during critical phases of a flight, which are normally below 10,000 feet.

SEE ALSO: Strange things you didn't know about your flight

SEE ALSO: Weird things you can take on a plane

The regulation was introduced in 1974 after an Eastern Air Lines crash when the flight fell short of the runway and killed 72 people. Despite the poor visibility due to heavy fog, investigators determined the cause was, in part, due to "the flight crew's lack of altitude awareness at critical points during the approach" and put this down to "poor cockpit discipline".

The rules of flying aren't as straightforward as you'd imagine and many of the strange laws that go beyond leaving your liquids and sharp objects at home could easily get you kicked off a plane.

Bad body odour, offensive T-shirts and having your tonsils removed could stop your from flying, while there are some odd items you never imagined carrying that will

Delta has no problem with passengers carrying antlers but says they "must be free of residue, the skull must be wrapped and the tips protected." It adds that they cannot exceed 115 inches or 100 lbs.
Thinking of becoming a flight attendant? Hawaiian Airlines isn't a fan of its staff being adventurous with their hair. It says: "Unacceptable hairstyles include, but are not limited to, extreme or unnatural colors (e.g., pink, purple), top-knots, dreadlocks, cornrows and Mohawks."
If you're planning on flying with Qantas and need to have your tonsils removed, you'll have to wait a lengthy three weeks before you're allowed to travel, according to the Herald Sun. With Japan Airlines, it's a two-week ban.
Delta states that you can be kicked off a flight "when the passenger's conduct creates an unreasonable risk of offense or annoyance to other passengers."
Emotional support animals range from dogs to pigs and even miniature horses but ferrets aren't allowed on flights. As Delta puts it, the airline won't accept "snakes, other reptiles, ferrets, rodents and spiders as Service Animals."
Airline obesity policies differ with some, including Alaska Airlines, requiring overweight passengers to purchase a second seat. British Airways passengers must be able to buckle their seatbelt and fully lower both armrests, otherwise they need to purchase a second ticket.
American Airlines states that the crew may refuse transport of passengers who "are clothed in a manner that would cause discomfort or offense to other passengers or are barefoot." Meanwhile, Virgin Atlantic says it refuses to transport any passenger "who is not wearing both top and bottom apparel." In 2017, a hen group was kicked off a Jet2 flight for wearing T-shirts with the phrase 'bitches on tour'.
Aside from the germs, there's another reason to keep your shoes on while flying. Some airlines including Delta say they "may refuse to transport or may remove passengers" if they are "barefoot".
A number of airlines, including American Airlines, Delta Air Lines and United Airlines, can kick you off a flight for having an "offensive odour". In 2010, Air Canada removed a passenger from a flight to Montreal after they emitted what fellow travellers described as a "brutal" odour. In 2014, a French man was ordered off an American Airlines flight to Dallas when passengers complained about his body odour.
Up Next