The worst smells in nature revealed 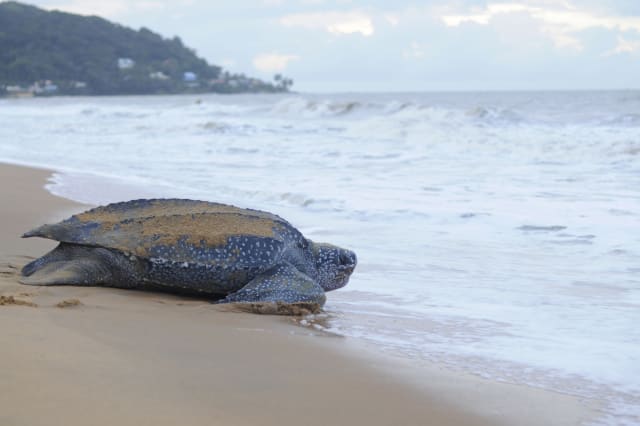 Dead sea turtle is one of the worst stenches in nature, biologists have revealed.

A Twitter thread started by conservation biologist at the University of Auburn, David Steen, asked: "RT if you're a field biologist and you've ever asked yourself, 'Why do I smell bad?'"

One scientist replied that a six-week dead fin whale that had been rotting in the sun was the worst smell he'd come across.

RT if you're a field biologist and you've ever asked yourself, "Why do I smell bad?"

Steen's own submission of dead sea turtle topped the list, while dead frogs, vulture puke and fresh skunk were also named in the thread.

Writing about the dead turtle, Steen wrote: "I remember a large dead turtle someone found on the road and put in the bed of their pickup in the GA summer heat. I walked by & puked."

I remember a large dead turtle someone found on the road and put in the bed of their pickup in the GA summer heat. I walked by & puked. https://t.co/uhIwvDBxwq

Meanwhile, Lauren Gilhooly, a third year PhD student at Western University in Ontario, said the carcass of a rhesus macaque was the worst stench, writing: "A decomposing rhesus macaque in the Puerto Rican heat."

Dive into the deep with a trip to the South Bank Aquarium and experience a day-in-life of marine biologist, with the chance to swim with and feed sharks. This Easter will also see the opening of the highly-anticipated Ocean Invaders exhibition, the UK’s largest jellyfish experience.

Open since 2002 and located within the Millennium Village alongside the Thames, Greenwich Peninsula Ecology Park is an exceptional home to biological diversity and environmental education. Regular conservation workdays every Wednesday and Saturday see wardens recruit visitors to help carry out important management in the marshes, meadows, shingle beach and woodlands.
The Hintze Hall at The Natural History Museum is reopening this summer after its anticipated redevelopment. The hall is lined up to feature new exhibits that’ll carry on the story where Planet Earth left off, telling the story of evolution, diversity in the world today, and our important role in protecting the planet.
With lakes, gardens, ponds, and playgrounds the Wetland Centre is an urban oasis 10 minutes from Hammersmith. Take your binoculars and try to spot the different types of wildlife that take sanctuary away from the city centre. The Nature reserve is home to kingfishers, voles, bats, redwings, peregrines, moths and many more.
ZSL London Zoo’s spectacular Land of the Lions exhibition transports visitors to India’s Sasan Gir to witness a pack of Asiatic Lions as never done before. The fully-immersive exhibit covers 2,500sqm and gives big cat lovers the opportunity to get closer than ever and role-play responding to a ‘lion-emergency’ in the Gir Forest.
Take inspiration from Bear Grylls and learn how to survive using plants and learn about their well-being benefits. Visitors to the Chelsea Physic Garden can get involved with walks, talks and workshops, learn to Bee keep and explore gardens, or pick herbs to make their own oils, ointments and lotions. Family activity days introduce children to a variety of animals including pygmy hedgehogs, giant African land snails, corn snakes, geckos, giant millipedes and hermit crabs.
One of the oldest attractions in London, open since Victorian times, The Horniman houses an aquarium and natural history collection. The Aquarium showcases 15 underwater exhibits from around the world – be transported to Fiji and South America to see poison dart frogs, reef fish, clown fish and pelagic jelly fish. Visitors can get up close and personal with alpacas, goats and sheep on daily animal walks.
Located in the Rockefeller Building at UCL, the Grant Museum has around 68,000 specimens. Aspiring Zoologists can get a hands on experience, discovering how heavy an elephant’s tusks is or how sharp a sharks tooth is during the Explore Zoology exhibitions on selected Saturdays.
With over 100 world-class attractions to keep your little explorers busy, Kew Royal Botanic Gardens will connect you to every part of nature from around the world. From the tropics to the desert, learning about the tallest tree to the deadliest seed, being as high as a bird in the treetop walkway to living like a badger in the Badger Sett - the Botanic Gardens has it all.
Battersea Park’s Zoo for children is a wildlife enthusiasts dream. Kids can join the Keepers in a one-to-one animal experience, helping to feed, clean and take care of the animals, while learning about the animals’ eating habits and favourite toys. From Asian Short-Clawed Otters, Bolivian Squirrel monkeys and Emus children will be able to watch the animals up close and personal.
Up Next

Here's what essential oil you need based on your mood