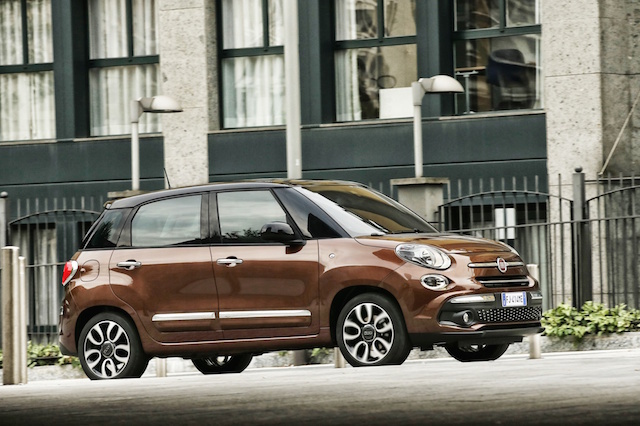 The Fiat 500L is a familiar car. Take a regular 500, add some growth hormones and you're left with a 500L – a far more practical take on the hugely popular little supermini.

Not much has changed with the new 500L. There's a slightly revised exterior, a minimalistic interior and a greater focus on technology – the new seven-inch touchscreen infotainment system, for example.

On the whole, though, the latest Fiat 500L is much the same as its predecessor. The engine line-up is the same, as is the car's overall image. The tweaks really add up, however, to make it feel different.

As far as economy is concerned, the Italian manufacturer claims that its 1.4-litre engine can manage 42.2mpg on the combined cycle, while emissions stand at 155g/km.

UK pricing for the 500L is yet to be announced, but Fiat told us at the launch that it should be consistent with the old model. This means that a 500L Lounge like the one we tested will probably cost around £20,000.

The Lounge specification is expected to be the best-selling 500L for the UK market. Equipment levels are generous, with a panoramic sunroof, 16-inch alloys, rear parking sensors, cruise control and that seven-inch touchscreen with Live services all included as standard.

While the infotainment system is a welcome feature, it does manage to feel rather outdated and slow compared with the solutions offered by rival

First Drive: Fiat 500L
Up Next

The Fiat 500L is effectively a small MPV, and there are a few rivals in this sector. For a start there's Ford's ever-popular B-Max. Solid reliability and a fairly compact exterior mean it is very comfortable. Inside though it is slightly dull in comparison to the Fiat, which makes merry with its retro styling.

The Renault Captur is slightly different. With its bold styling and funky interior it is a very close rival for the Fiat. The exterior styling of the Renault is more appealing to the eye too. It entirely depends on your own personal preference, however.

To drive, the 500L is likable in many ways, but far from exciting. The 1.4-litre T-Jet petrol that was fitted to our test car was smooth under hard acceleration, but did make quite a racket towards the top end of the rev range. It also didn't offer very much low down power, and struggled with the often steep hills on the outskirts of Turin. Around town, however, it was more than capable of getting the 500L moving. The six-speed manual gearbox was also slick to use.

Being a mini-MPV, driving dynamics were never going to be great. There was a good deal of lean through the corners, although the nicely weighted steering was communicative enough that you knew where the car's limits were at all times.

The suspension on the 500L, is very impressive. Around the rough and rutted city streets it seemed to glide over bumps without too much vibration or shudder in the cabin.

At the end of the day, the Fiat 500L isn't really that different from the old -one. It still has those divisive looks, and it doesn't drive any better than it used to. That said, it offers a decent amount of practicality, and young families in the market for a more left-field wagon could find the 500L an
appealing proposition.