These flying facts will gross you out 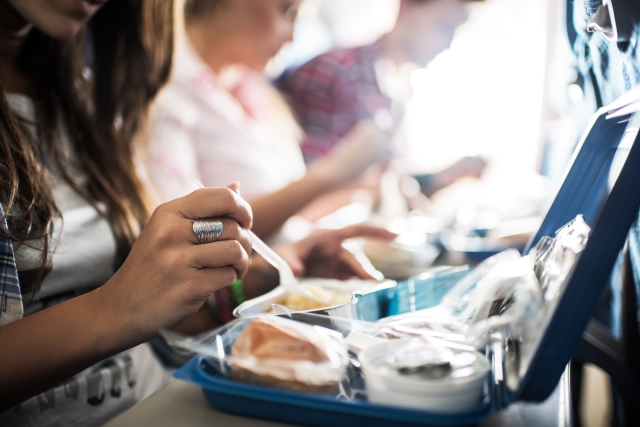 Air travel can be pretty gross - and we're not just talking about spending hours on a plane with no fresh air. If you thought the toilets were the only filthy spot on your flight, you're about to be unpleasantly surprised by these dirty revelations from airline employees.

Get the anti-bacterial gel ready for your next flight as these will change everything you thought you knew about flying. Do you enjoy a cup of coffee from the trolley? You won't after reading this. Thought the tray table was a clean enough place to have your meal? It's far from hygienic. Even strapping yourself in will make you want to wear disposable gloves before touching the seat belt once you've heard an unlucky passenger's horror story.

And if you're travelling with a soft shell suitcase, you'll want to invest in hard shell luggage after reading the most disgusting story we've ever heard about flying.

Prepare to be grossed out by these shockingly dirty secrets...

Disgusting things you didn't know about flying
The water used in your hot beverage likely comes from the plane's water tank, which probably isn't clean. One flight attendant revealed: "We call it the 'galley springs.' It’s basically the same water in the plane’s holding tanks that they use for the toilets. As far as I know, the tanks have never been cleaned. Ever." Another anonymous flight attendant wrote online: "The water from the plane is disgusting. I feel truly sorry for our coffee and hot water drinkers." In fact, you might want to stick to Coca Cola as one stewardess says that you shouldn't even ask for water. "I used to fill the water bottles with galley springs and serve it to customers," she said. "Unless you’re in First Class, nobody’s getting real bottled water."

Redditor oh-sneezeus says: "There are sometimes body parts in the storage area near your luggage (when they are flying transplants for hospitals). Also your pets are in the same area as well."

Thought your suitcase was safe in the hold? Redditor Legion3382, who works the ramp, confessed: "To elaborate on the body parts, we send full bodies on planes a lot. Some in caskets some not. Twice in the 7 years I've been doing this has 'fluid' leaked out of the boxes the bodies are in and got all over the luggage."

Redditor CreepyQ's story will put you off ever touching the seat belt again: "On a Delta flight a few months ago, I sat down and my seat belt felt wet. I smelled my hands ... and vomit. I asked the flight attendant if someone had thrown up in the seat before me, and she said: 'I’m sorry, I watched them clean it up three times. Disgusted, I asked for a different seat — nope, full flight. Couldn’t take a later, because we had my son and it was getting late. So, went to unbuckle my seat ... and little pieces of vomit fell out from the buckle on to my lap." He was, however, given bonus miles and free alcohol as compensation.
A Quora thread revealed that travellers should fly with their own headphones. One flight attendant revealed: "Next time you buy earphones, be aware that even if they are wrapped, they may not be new. Quite often, used earphones found on other flights are cleaned and repacked again. Make sure to bring your own headphones and don’t forget an aeroplane adaptor." Another former airline worker said: "Airlines who provide headphones hardly or even NEVER bother to replace the foamy-like ear parts. So please ALWAYS tear them once you use them just to make sure that they will replace them."
A former aviation journalist took to Reddit to reveal how the cabin crew get their revenge on rude passengers. "If you p**s off the cabin crew they will fart on you. The pressure on aircraft makes you naturally gassy and it's easy to puff one off in the face of an annoying git while bending down to speak to someone on the opposite side of the aisle."
Those tray tables are grubbier than you thought. According to Redditor seeyou_never they're a favourite spot for parents to change their baby's nappies. "DON'T CHANGE YOUR BABY'S DIAPER ON THE TRAY TABLE," the flight attendant says. "This also happens all the time. It's unsanitary and people use the tray table to eat, put their personal things on, etc."
Does your blanket smell like it's already been used? It probably has. A 2007 Wall Street Journal investigation found that airlines only cleaned the blankets once every 30 days. Unless they're visibly soiled, the blankets are reissued to other passengers and just because it's handed to you in plastic it doesn't mean it's new.
Commenting in a Reddit thread which asked flight attendants 'what do the passengers not know?' user seeyou_never revealed why you should never walk around without your shoes on. "So many incidents occur on the plane that every day passengers don't see or consider," they said. "My last flight an elderly man accidentally s**t on the floor, stepped in it, and walked on like it was nothing. DO NOT WALK AROUND BAREFOOT. Pee and poop happens, all over. I feel like I witness an 'accident' regularly; in their seat or in the lav. People get nose bleeds, or their wounds open. Obviously when we land, it is thoroughly cleaned. But inflight our resources are limited."

It's often the most unexpected areas that carry the most germs and after reading this, you'll want to carry anti-bacterial gel when you travel. The tray tables have been revealed as one of the germiest places on a plane, with the handy fold-away trays used as nappy changing spots and allow e. coli to survive the second longest on a plane - 72 hours. But a study from Aubun University found that the armrest is the number one breeding ground for e. coli to live on for up to 96 hours. Meanwhile, a Skyscanner study found that seatbelt buckles, overhead air vents and toilet flush buttons are also the dirtiest parts of a plane.
Planes are flying on tighter schedules than ever before which means there's less time for cleaning before a flight is turned around for the next group of passengers. Cold and flu viruses can live for days on surfaces and planes are germ hotbeds. Seat pockets where passengers stash their dirty tissues, tray tables where 60 per cent of those tested harboured the superbug MRSA, and plane blankets should generally be avoided. Anti-bacterial wipes are also a travel must-have!
Up Next