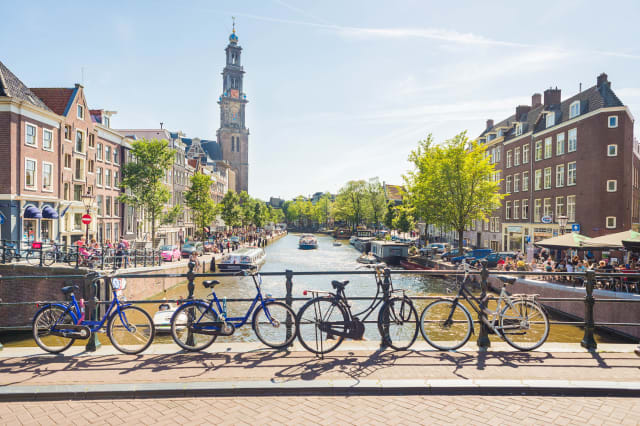 Eurostar are set to launch a direct service from London to Amsterdam - just in time for the Christmas markets.

There will be two trains a day at first, and the journey will take just under four hours, according to the Evening Standard.

Over three million people a year travel by air between London and Amsterdam, and the new service will challenge airlines like Easyjet and British Airways.

A direct route to Rotterdam is also said to be in the final stages, according to Kent Online.

The company this week unveiled a preview of its new e320 trains set to run between London and Brussels over the next 18 months. The new fleet has 20 per cent more capacity than present Eurostar services, and the trains have been operating on the London-Paris route since November 2015.

On its website, Eurostar said: "With its new e320 trains, which are interoperable and can operate on the European high-speed network beyond the UK, France and Belgium, the company is in the final stages of preparation for the launch of its new direct service to Amsterdam and Rotterdam.

"With over three million leisure and business passengers travelling by air between London and Amsterdam, this is one of Europe's most important routes. The introduction of a fast, comfortable point-to-point Eurostar service will greatly enhance the links between the UK and the Netherlands, revolutionising travel between these key financial and tourist hubs."

Nicolas Petrovic, Chief Executive of Eurostar, said: "The introduction of the e320 on the Brussels route marks an important milestone and step change in the travel experience for our customers.

"With demand for high-speed rail over plane on the increase, we are now gearing up to expand our reach to the Amsterdam and Rotterdam.

"The launch of our new direct service on this high volume route represents a major growth opportunity for our business".

Marjon Kaper, Managing Director NS International, said: "Today is a very special day for NS and all the partners, because the start of services with the new train to Brussels literally brings the "Amsterdam Route" closer.

"We see a lot of interest and potential for the high-speed connection between these top destinations – London for visitors from the Netherlands and Amsterdam and Rotterdam as the new hotspots for the British traveller."

Take to the canals to see the city from the water. But while boat trips aren't always the cheapest way to get around, Amsterdam's St Nikolaas Boat Club cruise is absolutely free. Run by a not-for-profit organisation, they do ask for a 10 Euro donation (around £8.50) and you can bring your own food and drink on board. It's no mod cons (no roof, no online booking, no life preservers) but it's a great way to experience a traditional tuindersvlet barge.

Or go at your own pace with a sport of canal biking in a 4-seater pedal boat, which you can hire from moorings around the city centre. They've got rain shields if the weather's bad, and you get a map and route suggestions before heading off to explore. Prices cost from around £6 per hour for two, or you can join the 90 minute Mystery tour for around £11, including a quiz. amsterdamboatclub.com

The masterpieces in The Rijksmuseum should be on everyone's must-do list. Although most of the museum is closed for renovation until around 2013, Rembrandt's The Night Watch and other works by Vermeer are still on display.

There's also a special temporary exhibition, Rembrandt & Jan Six: An Amsterdam friendship running until November 29, including the artist's portrait of his wealthy patron. Tickets cost around £11, but you can book online letting you skip the queue -ÂÂÂ after all, time is money.


If you'd rather a different work of art, head to the Tassenmuseum which has more than 4,000 bags collected by Hendrikje Ivo over 35 years and dating back to the 16th century - don't miss the For Your Eyes Only exhibition, looking at the contents of those handbags, until January 30, 2011. Tickets cost around£6.50. tassenmuseum.nl

For the millions who've read Anne Frank's famous diary, no trip is complete without visiting the Anne Frank House, one of the world's most moving museums. Showing where the teenager and her family stayed hidden from the Nazis for years, there are also exhibitions including Anne's original diary as well as information on the wartime persecution of the Jews and others encouraging people to think about human rights today.

Tickets cost around £7.50 and can be booked online in advance, letting you skip the queues. annefrank.org

Amsterdam is traditionally a city of bikes, but trade two-wheeled transport for a walk in the laid-back Vondelpark. Designed as an English-style park, you can wander along winding paths and through woodland before stopping at the 1930s Blauwe Theehuis (or Blue Tearoom)ÂÂÂ for coffee and some traditional Dutch appeltart.

Or for a stroll among the flowers, head to the Keukenhof Flower Gardens in Lisse. Only a 15 minute bus rise from Schiphol airport, it's open from March 4 to May 20, 2011, when more than 7 million flowers bloom along 15km of footpaths. Tickets cost around £12.50. keukenhof.nl

After all the walking, you'll work up quite an appetite, so try something traditional with a twist. Originating in the Dutch plantations of Indonesia, Rijsttafel, or rice table, is a spread of up to 30 small dishes, served with rice so you can try a bit of everything. For a stylish version, head to Long Pura where you can get 13 dishes for around £22 per person.

Go open-minded and empty-bellied, and Supper Club won't fail to impress. There might be outposts around the world now, but Amsterdam's is the original and, we think, still the best. Although people come for the talkability factor, the food is top-notch, too. You'll sit on massive mattresses to dine, there's no menu as such (you eat what you get given) and expect some OTT entertainment. Not for the fainthearted, but still brilliant. supperclub.com

If it's Amsterdam, it has to be gin. So swap the traditional 'brown cafes', the city's equivalent of the old-fashioned pub, and try your hand at tasting the original jenever liquor. The tasting room at Wynand Fockink, named after the a 17th century merchant who set up the original distillery, has one of the widest selections in Amsterdam. Try the WF Superior, a three-year-old malt jenever or Bruidstranen, a spiced wine called the Bride's Tears, served before a wedding, as well as eyeing up the antique storage bottles in the tasting room. Visit wynand-fockink.nl to book a tour or tasting.

Or in House of Bols you can hear about the origins of the 16th century distillery, discover more about the ingredients used and try a taste test, before finishing up with a cocktail, all for around £10. bols.com

The city is the diamond-cutting centre of Europe, but unless you're strong-willed enough to try one of the free tours of the many Amsterdam workshops without wanting to buy, bypass the precious stones to browse at the Albert Cuyp Market in De Pijp for 260 stalls with everything from fresh fruit and herrings to fabrics and jewellery.

Or head straight to the Negen Straatjes, nine lanes running through the Western Canal Belt, packed with boutiques. Go for stunning Indian-inspired jewellery at Beadies and fabulous bags and shoes at Hester van Eeghen. For shopping with a real difference, Redlight Fashion Amsterdam has transformed several buildings in the red light district into exhibition spaces for designers so stop by to check out the latest new names. redlightfashionamsterdam.com

If you've blown the budget at the boutiques, treat yourself to a music performance by a world-class orchestra - completely free. Rehearsals at the Mueziekgebouw concert hall, near Amsterdam Central station, are open to the public and have no entrance fee. They take place between September and May, at 12.30pm on Wednesdays.

Or there's free music or dance at the Boekmanzaal on Waterlooplein Square, performed by the Netherlands Ballet and the Choir of the Netherlands among others. The performances take place on Tuesdays at 12.30pm between October and June.

Easyjet flies from London Gatwick to Amsterdam. Prices one way start from £32.99 and return from £65.98.

Eurostar travels from London St Pancras to Amsterdam with prices starting at £89 for a single ticket.

DFDS sails from Newcastle to Amsterdam. The Let's Go Dutch two for one campaign lets two adults travel from £69 until March 2011. Prices starting from £27 for foot passengers.

If you like your beds large and comfy, and your hotels with super-slick interiors, but aren't fussed by space, Citizen M will be something of a revelation. With two outposts in Amsterdam, one at the airport and the other a 10-minute tram ride to the city centre (it is walkable, but you'll need comfy shoes), Citizen M is the cool kids' insider secret. The rooms are very small (don't say we didn't warn you), but with rainforest power showers, massive beds, free films and all the mod-cons you could need, why pay for more space if you're going to spend your days out and about anyway? citizenm.com