Danniella Westbrook burst into tears as she was taken off a flight after a row over paying for her luggage – and was even accused of pushing airline staff, the Mirror can reveal.

The incident, which took place on an Easyjet flight from Gatwick to Malaga last Thursday, saw Danniella being told to fork out £45 to have her hand luggage placed in the hold, even though other passengers were allowed to stow their bags for free.

SEE ALSO: Easyjet compensates for Jo Wood for being booted off overbooked flight

Eyewitness Darren Murkin, who was with a group of 20 friends for his brother Neil's stag do, told Mirror Online that Danniella questioned easyJet staff at the gate about why she would have to pay when she could just put her handbag inside her cabin bag and have it put in the hold free of charge. 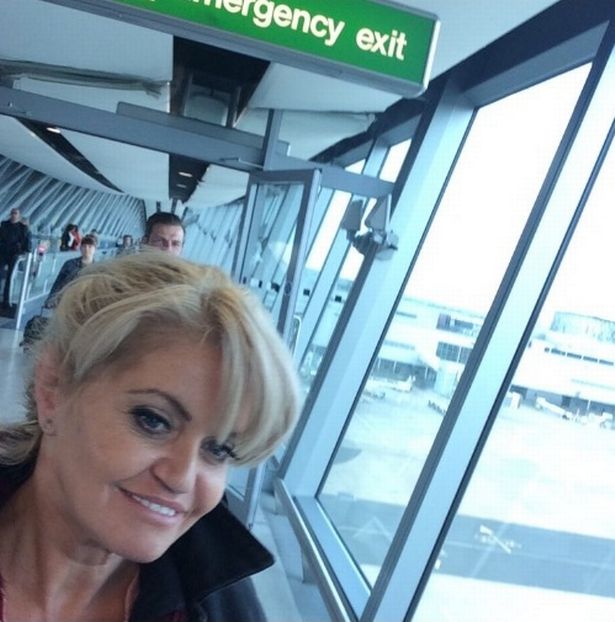 "It was then that she was asked by the boarding staff to step out of the line and the staff accused her of pushing them, which didn't happen, and we made our feelings known to the staff they were in the wrong," said Darren.

"We then had to wait 20 minutes for her to board and then we ended up sitting on the tarmac for nearly 30 minutes before they decided to remove her due to an 'incident at boarding'.

He said the ex-EastEnders star "did barge past" an agent on the gate but never pushed staff.

Contrary to other reports, Darren said Danniella got on well with the other passengers and there were no insults thrown at her from his stag group after she was told to leave the aircraft.

Danniella befriended the stag group - including groom-to-be Neil Murkin - who were on the original flight, and they even ended up going to her Malaga bar

"She was very pleasant to the other passengers whilst sitting on the tarmac chatting to fans, having pictures. She got off the flight with no trouble caused at all and was very compliant [with the staff's instructions]," he said, adding that Danniella had previously invited the whole stag group to her bar in Malaga when they got chatting prior to boarding.

According to the Sun, tearful Danniella was offered a seat on a later flight as easyJet staff tried to cool the situation.

She made it out to Malaga and Darren, his brother Neil and their friends even met up with her while they were out there.

"In fact, the following three nights we went to her bar and ended up having chats and selfies with her and she couldn't have been nicer," he added.

"In my opinion, easyJet made the situation ten times worse and there was no need for her to be removed from the flight."

Best airlines in the world 2017 (TripAdvisor)
Up Next