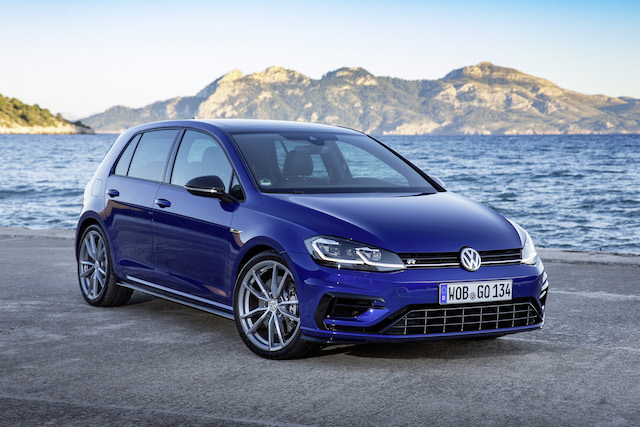 This is the latest version of Volkswagen's performance Golf.

Dubbed the Golf R, it is a hot hatch with understated looks, but serious power under the bonnet.

Volkswagen's Golf R has been face lifted for 2017. It now packs a 306bhp punch – up 9bhp – and has an updated interior with a new infotainment screen and all-digital dials.

On the outside it has been slightly tweaked too, although it isn't easily noticeable. That's no bad thing though as it was always a handsome looking car.

New bumpers and sharp LED lights give it a fresher, more masculine stance, but for the most part it's a subtle change, with the Golf R retaining its understated looks – something that has won favour with drivers who like to drive a super-quick hot hatch under the radar.

The Golf R has a 2.0-litre turbocharged petrol engine producing a substantial 306bhp. To put that in to context, a BMW i8 has 357bhp – and you can't fit five people and their luggage in one of those.

It has 379Nm of torque, handy for safe overtaking, and thanks to all the power being delivered to all four wheels, there is a serious amount of grip. Our test car also had the six-speed manual gearbox, but a dual-clutch automatic is available too, which brings the car's 0-60mph time down from 4.8 seconds to 4.6 seconds.

The Volkswagen Golf R costs from £31,510. For that, an array of extras, including adaptive cruise control, climate control and an all-new satellite navigation system, with an eight-inch touchscreen. The R's subtle bodykit is standard too, as are 18-inch alloy wheels.

Our car was a hefty £38,165, thanks to a larger 9.2-inch screen with gesture control, lane assist with dynamic light assist and full Nappa leather upholstery. In truth, you could do without all the extras fitted to our car, although we would recommend the upgraded infotainment system as it is very enjoyable to use.

It is a superb all-rounder for the £30,000 mark. You can option the automatic gearbox, but it will cost more than £1,000, and the manual is super-slick regardless.

The Golf R is up against many other German contenders and is very closely matched all of them. The Golf R easily sits with the Mercedes A45 AMG with 376bhp, BMW M140i with 335bhp and Audi S3 with 296bhp. All of them are similarly priced, but the Golf is the cheapest and still offers just as much practicality, fun and performance as they do, and with two less cylinders than the BMW.

Here's where the Golf R's really excels. Thanks to its four-wheel-drive system, it is usable whatever the British weather throws at you. Even torrential rain failed to let the car slip or slide once.

The Golf R has sports suspension, which does make the car ride fairly firmly. Adaptive Chassis Control is an optional extra though, that allows you to change the car's ride while on the move. If we're honest though, it's perfectly acceptable as standard, dealing with most bumps and potholes in the road rather well.

The Golf's throttle response is impressive, and you can use the car's huge chunks of torque to push you out of even the tightest of bends. It does this in a very Germanic way too, with no fuss, just sheer acceleration. This means you cover large distances without thinking about it. Body roll isn't an issue either, adding to the feeling of composure when cornering. It does all with precise accuracy each and every time you get behind the wheel, with the Golf's all-round usability shining through no matter what the conditions.

If you're looking for car that is going to be quick, dependable and surprisingly practical on a day-to-day basis, then you're going to want the Golf R. Yes, it may not be quite as quick as the Mercedes-AMG A45, but its all-round usability and manageable price tag make it a thoroughly worthy choice.