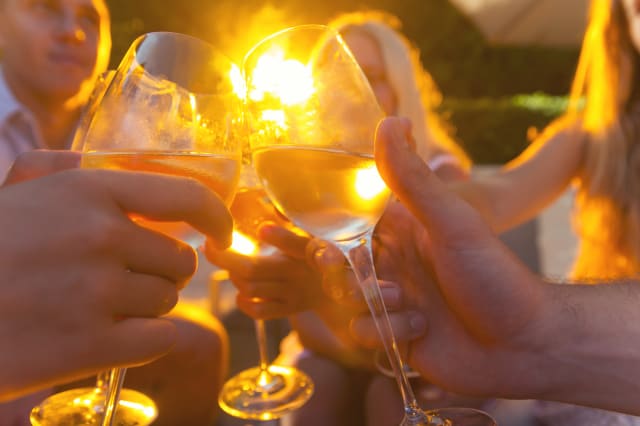 What better way to tingle your tastebuds on holiday than visit a wine festival?

We asked SmoothRed, a leading company specialising in wine holidays and tours, to recommend the pick of the bunch for this year.

From a riot in Rioja to a knees-up in Budapest, these tantalising festivals will hit the spot for all wine buffs looking for a taste of something special this year.

Pop your cork in Champagne, France 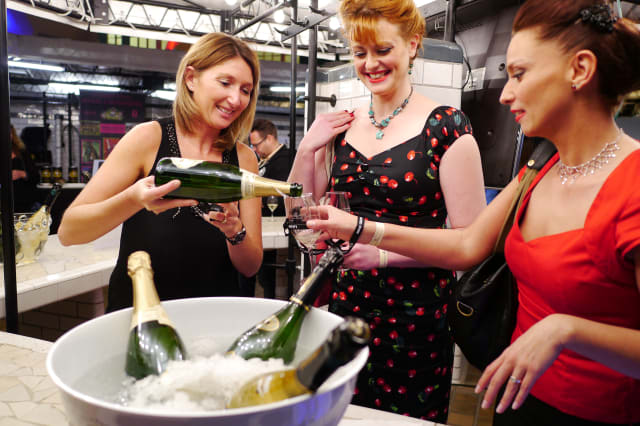 Who doesn't reach for the Champagne on a special occasion? So it's surely apt that the world's favourite sparkling wine has just become the subject of a celebration itself.

A new annual event, La Champenoise, which launched in 2016, will get the corks popping again on 9 and 10 June in Reims, the home of Champagne just north-east of Paris.

There, you can learn all about France's famous bubbles from more than 65 Champagne houses, including famous names and lesser-known independents.

They'll be topping up glasses for tastings and offering bargain prices for those wishing to stock up their cellars.

Glug on the run in Bordeaux, France 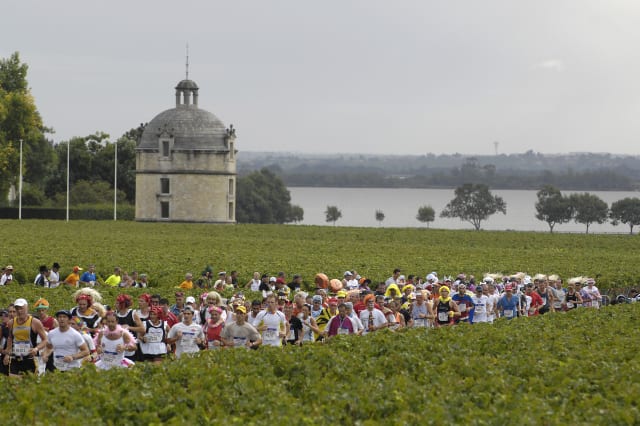 Limber up for the world's booziest race.

It may sound like more of a marathon drinking session than a cross-country run, but this is a serious road race with an edge of fancy-dress fun.

Thousands apply to stride out amid the iconic French chateaux on the banks of the Gironde for Le Marathon du Médoc each year.

And what better way for runners to keep hydrated than with the fine wines produced from the surrounding plumptious grapes?

As for refuelling, participants can forget the usual energy gels: oysters, steak, and ice cream are just a few of the tasty treats the runners will stock up on at pitstops along the way.

Have a riot in Rioja, Spain 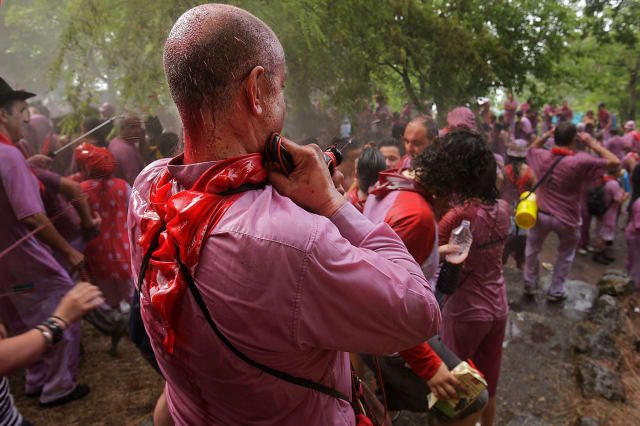 Get ready to battle it out at the annual wine fight in Rioja, La Batalla de Haro.

Thousands of revellers turn out to drench each other in local wine on a hill just outside Haro, a town at the heart of Spain's Rioja vineyards, during this novel annual wine festival, from 28 to 30 June in 2017.

The tradition stretches back to the 13th century, when the good people of Haro and the neighbouring village began meeting each year to mark the boundary between the two communities.

A few hundred years later, this convivial meet-up deteriorated into a scrap, with the rival groups throwing wine at each other – and a curious annual event was born.

These days the stand-off is more friendly than feisty, and is followed by partying in the streets.

Raise a glass in Budapest, Hungary 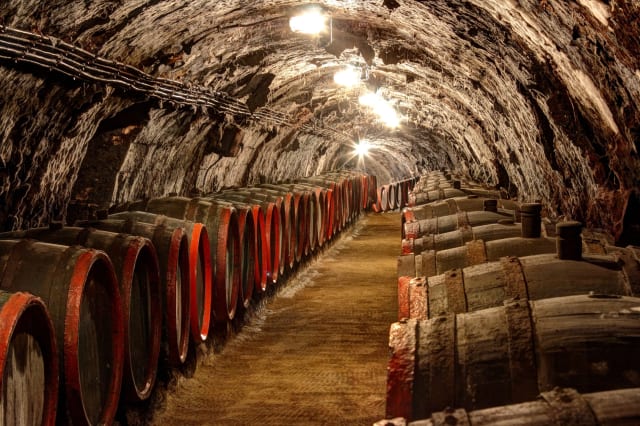 Hungary? Wine? Find out more about this nation's overlooked vineyards at the Budapest Wine Festival, from 7 to 10 September in 2017.

More than 200 wineries will be showing why the fruits of their vines have moved on from being the cheap choice for the desperate student to eminently quaffable vintages and Hungary's emerging wine scene is one to watch.

What's more, the festival takes place in the fabulous setting of Buda Castle.

There you can test the wines on your discerning palate, while enjoying sublime views of the city from the terraces of this medieval royal palace.

SEE ALSO: Take a look at this underwater winery in Croatia

Bring in the harvest in Paris 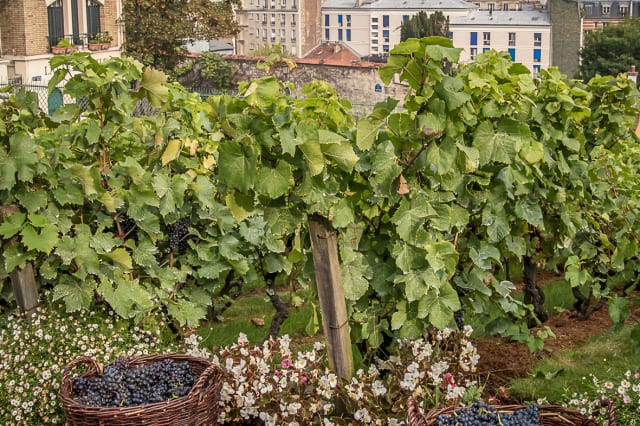 Who knew you could celebrate the grape harvest in the shadow of Sacré-Coeur, right in the heart of Paris?

That's what happens each year at the Fête des Vendanges de Montmartre, from 11 to 15 October in 2017.

The 2,000 serried vines of Clos Montmartre cling to a steep slope in the midst of the 18tharrondissement, from which 1,000 bottles of red are produced each year.

They're auctioned off for charity at this annual festival, which harks back to days of yore despite the vineyard being planted in the 1930s.

This being Paris, the event also doubles as a contemporary arts festival, with a packed programme of concerts, art exhibitions, poetry readings and more.

For more ideas on wine tours and holidays, visit SmoothRed.co.uk

Got just a few nights to spare for a boozy break? Grape Escapes offers a flexible long weekend in Portugal for mid-week and weekend holidays from March to November. Stay in Portugal's northern capital Oporto and visit two prestigious wine lodges, cruise the Douro river, enjoy a gala dinner and have a traditional food and wine tasting lunch. In addition, you choose from a tour or tastings at a Vinho Verde winery or a winery in the Douro region. From £279 per person excluding flights.

New for 2013 from BKWine is a wine and food tour in South Africa. Sarting in Cape Town and taking in classic wine regions Stellenbosch and Franschhoek, you also explore up-and-coming spots Durbanville, Wellington and Swartland. There are also in-depth tastings of the local gastronomy and trips to see attractions like  Table Mountain and Cape Point's wildlife. Add an extra two days to your holiday for a luxury safari at a private game reserve. An eight-night tour is from 1 to 11 March 2013 starts from 2,650 euros.

The aptly named Vineyard Hotel at Stockcross is a sanctuary for food and wine lovers in the Berkshire countryside. Owner Sir Peter Michael has a winery in Northern California, rated by wine aficionados as being one of the greatest wine estates in the world. A new wine list features 100 fine wines and a taster menu. The Vineyard has also revealed a dazzling new wine vault made of crystal-clear glass encased into the walls and a new glass floor providing a voyeuristic glance into the extensive wine cellar. There are exclusive wine rejuvenation treatments at the spa, which use natural grape-based products known for their anti-ageing properties. Rooms from £125 per person.

A luxurious wine break in Napa Valley is hard to top. Quintessentially Wine offers a California Wine Tasting Tour in this famous American wine region which pulls out all the stops: you'll be collected from the airport by a chauffeur driven car, stay at the plush Carneros Inn (which is surrounded by vineyards) and take a number of exclusive wine tours of including Plump Jack Vineyard, Auberge de Soleil and Cake Bread cellars. Try up to six current vintages and UK wine expert Matthew Jukes will guide you through the experience. From £880 per person.

Spend a week in Bulgaria visiting the country's significant historical attractions and popular wine regions and wineries. Balkan Holidays has launched Bulgarian Wine Tours for 2013 taking in Nessebar, the Kazanlak region and Plovdiv in May, June and September. You'll visit the Royal Cellar in Banya, dine and stay at the Wine Palace hotel and enjoy tasting local wines. There is also a visit to the House of Wine, which has a selection of the best Bulgarian wines including Melnik and Gamza, plus an afternoon at the Haskovo winery where southern Bulgarian wines are produced. The tour is by coach and starts from £905 per person including flights.

If you like your champers, why not spend a sparkling long weekend in Champagne, France. To celebrate its 25th anniversary, Arblaster & Clarke is holding a weekend party where you can taste wines from ten top champagne houses including Billecart-Salmon, Bollinger, Taittinger and Cattier at a private champagne festival in the medieval meeting rooms of the Counts of Champagne in Reims. There will also be a gourmet dinner and a lunch in the champagne cellars of Vilmart. The weekend takes place between 23 and 25 November 2012 and costs £899 per person.

Like New World wines? Head to South America for winery visits, city tours and foodie experiences. BKWine's new Chile & Argentina holiday launches in 2013 taking in Buenos Aires, Mendoza, the Pampas, Santiago de Chile and Valparaiso. In addition to exploring the wine and food of the countries, you'll dance tango in Buenos Aires, go on a road trip over the Andes Mountains and enjoy genuine asado barbecues with the famous Argentinean meat. The 13-night tour takes place from 4 to 9 February 2013 and includes 20 winery visits and plenty of gourmet meals. From 4,330 euros per person.

Go on a scenic drive and indulge in unforgettable wine and food experiences on the Classic New Zealand Wine Trail. The 240-mile route is signposted and links three of New Zealand's leading wine regions, Hawke’s Bay, Wairarapa and Wellington, with seven farmers markets, over 230 wineries (100 have a cellar door open to visitors) and events throughout the year, like Martinborough's Toast Martin in November. Download the trail map for free from classicwinetrail.co.nz

Imagine being stuck on a ship with a true wine connoisseur and a vast array of wine. Well, with Celebrity Cruises you can do just that. The company has teamed up with London wine spot Vinopolis to create a fabulous cruise taking in the renowned landscapes of France, Portugal and Spain. With more than 350 selections of wines on board the ship, there are expert-led sessions and masterclasses including a cheese and wine pairing, and you can book a place on a Bordeaux excursion to sample delicate regional wines and enjoy a gourmet lunch. The Vinopolis cruise with Oz Clarke leaves on 13 October 2012 from Southampton and starts from £849 per person for 12 nights' accommodation, meals and wine events. The Bordeaux excursion costs an additional £149 per person.

Explore the diverse wine-making history of Sicily with Sunvil's new Sicily Wine Trail and you'll be transported back through the centuries over eight nights, staying at four different wine estates and taking cookery courses and tours. The best time to go on this self-drive tour is between September and November, during the vine harvesting season. From £859 per person including flights, eight nights' accommodation at four wine estates and car hire.