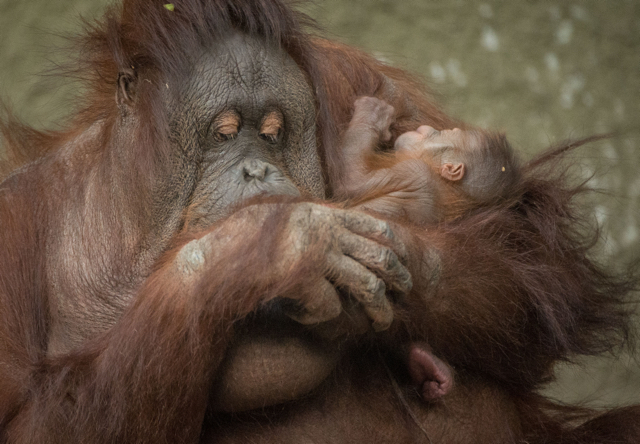 A critically endangered Bornean orangutan has been born at Chester Zoo - the first of its kind to be born at the zoo in almost a decade.

The new arrival was born at 11:15am on Sunday morning (April 2) in front of a handful of amazed onlookers. It followed an eight-and-a-half-month pregnancy for mum Sarikei and is a first offspring for dad, Willie.

Zoo conservationists say that the baby is a huge boost to a breeding programme, which is working to conserve the iconic species, which faces an uncertain future in the wild.

The most recent estimates indicate there could be as few as 55,000 Bornean orangutans left on the island of Borneo in Indonesia - the only place they can be found in the wild. The species is heavily threatened by illegal hunting, habitat destruction and the conversion of their forest to palm oil plantations, which have all pushed the species to the very brink of existence. 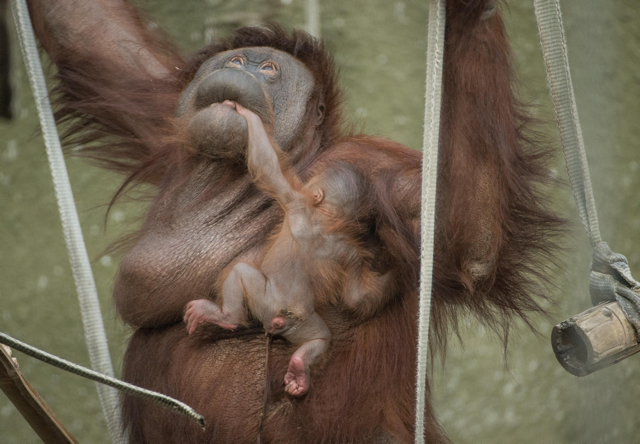 Chris Yarwood, primate keeper at the zoo, said: "Seeing mum Sarieki holding her tiny baby close is an amazing sight. It has been eight years since we last celebrated the birth of a Bornean orangutan at the zoo but it's well worth the wait.

"This is Sarikei's third baby and although it's very early days, she is so far doing a wonderful job of caring for her little one. She's a great mum.

"It's also the first youngster that our male Willie has sired. He has a great personality and we're very hopeful that he will make a great father as he is still young himself and enjoys playing with the other orangutans."

Last year the International Union for the Conservation of Nature (IUCN) changed the status of the Bornean orangutan from endangered to critically endangered. Now, more than ever before, the species faces a very high risk of extinction in the wild.

Tim Rowlands, the zoo's curator of mammals, added: "Bornean orangutan numbers are plummeting at a frightening rate. A major threat to the survival of these magnificent creatures is the unsustainable palm oil industry which is having a devastating effect on the forests where they live. They are also the victims of habitat loss and illegal hunting.

"Those who are responsible for their decline have pushed them to the very edge of existence – and if the rate of loss continues, they could very well be extinct in the next few decades. It's therefore absolutely vital that we have a sustainable population of Bornean orangutans in zoos and every addition to the European Endangered Species Breeding Programme is so, so important.

"It's also imperative that we continue to tackle the excessive deforestation in Borneo and show people everywhere that they too can make a difference to the long-term survival of orangutans. Simple everyday choices, such as making sure your product purchases from the supermarket contain only sustainably sourced palm oil, can have a massive impact." 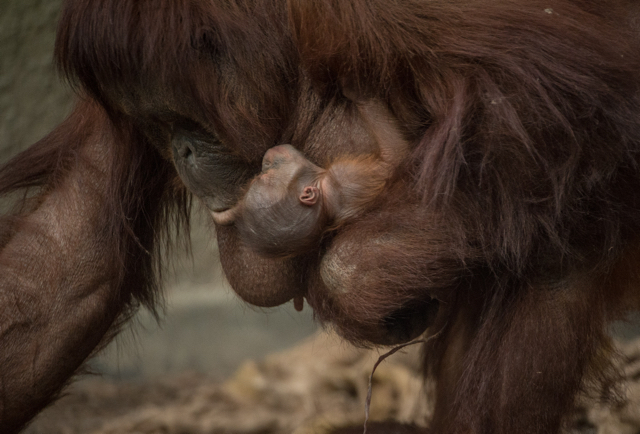 Chester Zoo is working with project partners HUTAN in a bid to protect wild orangutans in Borneo. Conservationists have been carrying out research in the Kinabatangan - home to one of the largest populations of orangutans in Sabah - to gain a better understanding of how orangutans are adapting to the increase in oil palm plantations and the new landscapes which they have created.

A team of zoo experts have also travelled to the wild to help build special 'orangutan' bridges – designed to connect pockets of fragmented forest and enable orangutans to safely travel between different areas. Staff are also working on environmental education programmes which educate communities surrounding the forests about how they can help save the species.

Here in the UK, Chester Zoo is campaigning against the use of unsustainable palm oil in everyday household and food items, working with national governmental organisations and industries using palm oil to adopt Roundtable for Sustainable Palm Oil (RSPO) practices and raise awareness of the devastating effects unsustainable palm oil has on wildlife.

Visit www.actforwildlife.org.uk/orangutans to join the fight for orangutans.

Baby zoo animals around the world