Car crashes onto beach in Cornwall 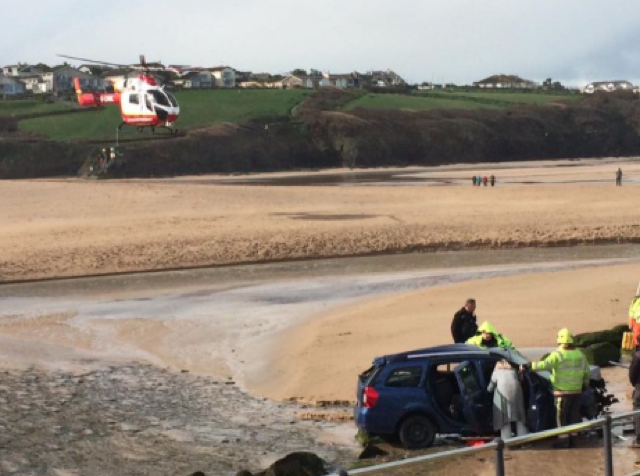 Two men had to be cut from a car after it went over a cliff and landed on a beach in Cornwall.

The car came off the road and onto a rocky area of beach at Porth, in Newquay, on Wednesday morning.

Footage shared on Cornwall Live showed the aftermath of the scene.

Police, ambulance and fire crew rushed to the area, along with an air ambulance.

The driver, in his 40s, and a passenger in his 70s were thought to have suffered neck and chest injuries that weren't life-threatening. There was also believed to have been a dog in the car, which was uninjured.

The BBC reports that both the men were taken to Royal Cornwall Hospital in Truro.

A number of images of the scene were uploaded to social media.

Newquay Fire Station tweeted: "#busymorning with some #multiagency #working after a serious incident involving a #car going over a #cliff in #Newquay #airambulance."

#busymorning with some #multiagency#working after a serious incident involving a #car going over a #cliff in #Newquay#airambulancepic.twitter.com/mGQ4uhKJTU

According to PirateFM News, a spokesperson from Cornwall Fire and Rescue Service said: "Two appliances from Newquay, the rescue tender from Bodmin along with a wholetime officer and a specialist technical rescue officer were mobilised to an emergency call for assistance from South West Ambulance Service. They reported a vehicle had gone over the side of a cliff onto Porth Beach in Newquay.

"When the first appliance arrived on scene, the vehicle was discovered on the beach with two casualties injured and trapped inside.

"Initial first aid was administered by Cornwall Fire and Rescue personnel until the arrival of the ambulance service.

"Crash rescue equipment was used to extricate the casualties from the vehicle and they were handed into the care of the air ambulance who were also on scene."