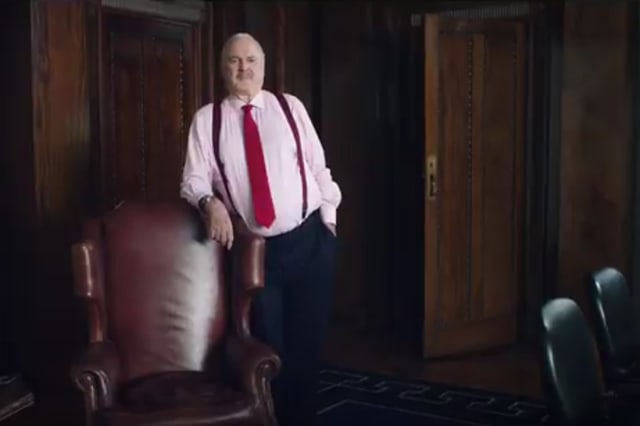 The adverts don't pull any punches. One features Cleese as a banker, giving a speech to other braying bankers, claiming that they'd really rather not repay any more PPI. Another shows him (again as a banker) teaching a small boy the importance of stealing from the 'little' people because they don't have advisers, and another shows him making life difficult for a customer who wants his money back.


The approved ads, by contrast show him making it clear that he's not a banker, and that his decision to wear a stocking over his head is because of a penchant for women's underwear rather than any reference to bank robbing. They then outline that there's lots of PPI left to reclaim, and highlight the number of a claims company.

Of course it goes without saying that the whole thing is a publicity stunt. They were never going to be approved for TV, and it's just a good opportunity to have Cleese say outrageous and shocking things about the banks.

By putting the adverts online, the company is trying to prove it's on the side of customers, and is just as outraged by the behaviour of the banks as we are.

But let's not get carried away.

For most of us, PPI claims companies are still the firms pestering us with endless nuisance calls, offering us services that we don't actually need, at a cost we may not immediately fully appreciate.

It's essential that anyone who fancies watching Cleese take the mickey out of bankers bears in mind that you don't need a PPI claims company in order to make a claim. If you go with a claims company, they will often charge up to 30% of any money owed to you for making the claim. In some cases, that's hundreds of pounds for what can be a very straightforward process.

It's perfectly easy to do it yourself. You don't even need to be sure whether you had PPI or who your lender was. You don't need the paperwork either. You can get hold of all of this information easily. There are plenty of guides online to take you through the process for free - and one of the most popular is on the moneysavingexpert website.

So by all means, watch the 'banned' adverts, and watch the interview where Cleese jokes that it's the 99% of bankers that give the honest 1% a bad name. Then close the website, and go and make a claim on your own.

5 PHOTOS
Celebs who have suffered financially after divorce
See Gallery

Celebs who have suffered financially after divorce
In 2009, after a bitter divorce battle, Cleese was forced to give his third wife £8 million in cash and assets - including a £2 million Holland Park house and half a beach house in Santa Barbara. He must also pay significant alimony. He didn't run up debts during the process, but has sold a number of assets - including paintings and props, and has been on a world tour with his one man show: 'How to Finance your Divorce'.
He said in September last year that he was 'downsizing' his life, selling his ranch in Napa and returning to TV where the pay is steadier. According to Fox News he added: "Divorce is expensive. I used to joke they were going to call it 'all the money', but they changed it to 'alimony'.
The Gossip Girl actress filed for bankruptcy this year. One major contributing factor was an enormous legal bill from her divorce and custody battle with her ex-husband. Her German husband had been deported, and the divorce lawyer ruled that the couple should spend equal time with the children. Because her husband could not enter the US, he ruled that they should live with their father and Rutherford should travel to visit them. She told E!News she had "spent every penny. Every penny from Gossip Girl, my pension, my stocks has been spent fighting for my children."
One of the oddest celebrity divorce settlements was in the late 1970s when Marvin Gaye was ordered to record a new album and pay the royalties to his ex-wife. The album is called Here My Dear and includes songs such as "You can leave, but it's going to cost you'. The cost of the divorce was one of a number of factors that drove him to bankruptcy in 1979.
The Sopranos actress (who played Dr Jennifer Melfi) filed for bankruptcy in 1999. She had spent five years fighting a custody battle with her ex, Harvey Keitel, and despite getting custody of her daughter, she told the New York Times she was left $2 million in debt to the lawyers in her bankruptcy and custody cases.
Up Next