How does your household food spend compare? 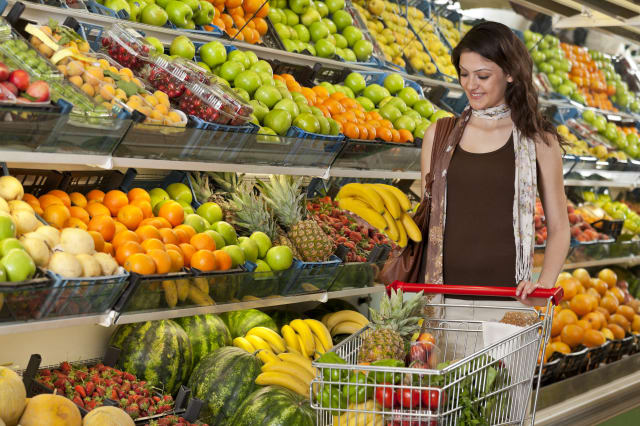 Wine, bread and veg are among our biggest spends at the supermarket, with the average family weekly food shop coming in at £53.20.

The average spend on everyday items has been broken down in a new report from the Office of National Statistics (ONS).

See also: Are essentials like food and fuel costing you more?

The report covers a huge range of expenditures, including food, transport and education - totalling an average of £528.90 a week.

Transport and housing come out as the biggest expenses, but we've delved into the food and drink figures to show you not just what we're buying as a nation, but also how much we're spending on it all.

Obviously we're spending more on some products than others. We're a country that loves carbs. Bread and biscuits – combined with pasta and rice, add up to £9 a month in total.

We spend more on fish than any type of meat, while some items are costing us less because they're generally quite cheap – eggs, tea and coffee for example.

How does your weekly spend compare?

Spending varies around the country. People in Northern Ireland have a weekly basket worth £59, while those in the North East of England spend just £45.50.

This doesn't necessarily mean food costs more or less in the different areas. Higher disposable income in the South East will account for some of the increased spend in this region.

The figures also show the variations in spend across the country on specific items. Despite being one of the biggest spenders on food each week, Londoners proportionally spend less on cake than the other regions. You can find out more about how much people spend and what they buy on the ONS website.

Feel you're spending too much on food? Our tips to trim your supermarket bill

10 tricks supermarkets use to get you to spend more
The subtle manipulation starts as soon as you enter the store when you are assailed by the smell of flowers and fresh bread, which are often placed near the door. The smell is intended to put you in a good mood and to get your salivary glands working. You are also more likely to pick up these higher-ticket items when your cart is empty. Similarly, fresh produce like fruit and vegetables (one of the most profitable sections at the supermarket) is also usually at the front because the bright colours are more likely to lift your mood than bland cartons and cans. Mist is sometimes sprayed on the fruit and veg to make them look fresh but can actually make them rot faster.