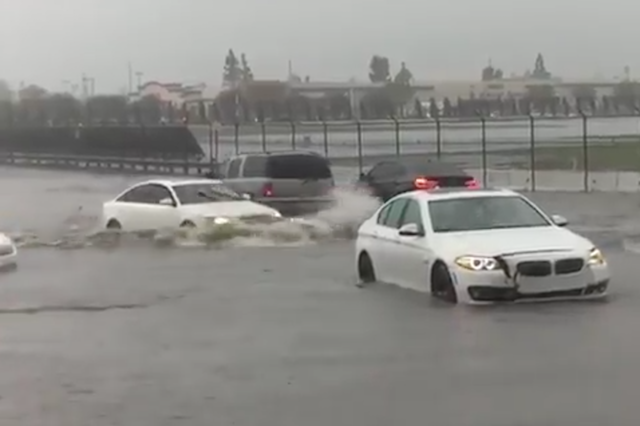 Audi has taken the opportunity to give rival carmaker BMW a light ribbing on Twitter.

The official account of Audi America quoted a tweet by ABC News, which showed cars battling against floodwater in California.
In the clip, which was posted on February 18, three BMWs can be seen stranded in water that comes up to the bumpers. The video then captures an Audi driver cruising through the deep water without any troubles, even giving a friendly beep to the person filming.

Audi shared the video with the caption: "Wait for it. #quattro."

Quattro is the name of Audi's all-wheel drive technology, which gives its cars excellent grip in adverse conditions.

BMW is better known for fitting its cars with rear-wheel drive, which typically gives better driver enjoyment in the dry but isn't so capable when the weather takes a turn for the worse. The manufacturer does have its own all-wheel drive technology called xDrive, but it's unclear which drivetrain the stranded cars had.

The Quattro name became famous because it was the first time all-wheel drive technology had been applied to a mainstream production car. Audi's engineers created a road car called, simply, Quattro, which had unbelievable all-weather performance, sending car enthusiasts wild with excitement.

When Audi entered a Quattro into the World Rally Championship, it absolutely dominated the field, which was made up solely of two-wheel drive cars.

With so much history and pride in the Quattro technology, it's easy to see why Audi couldn't resist a swipe at its rival!