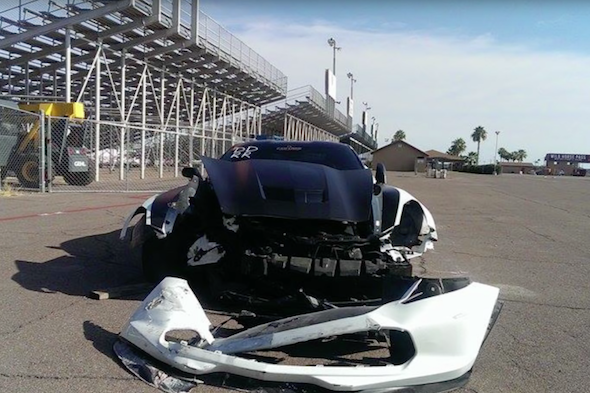 A video from Arizona shows the eye-watering moment a new Corvette Stingray was totalled while drag racing.

The car gets off the line fairly well, but about 200 yards down the Phoenix strip it crosses on to the dirty part of the track and its tail steps out, causing the driver to lose control and sending the $71,000 (£57,000) car into the concrete wall.
Fortunately, the spinning 'Vette didn't take out the motorcycle it was racing, but the still photos of the aftermath show that the car was almost completely destroyed.

On-board footage taken from a camera mounted on the rear flank shows just how much force went into the accident, and renders the damage totally unsurprising. However, the video says the driver's only injuries were bruising.

According to the comments section, though, the driver later received two years' probation for insurance fraud after claiming that the accident occurred on the interstate, rather than on the drag strip.