Car driver gets stranded on steps after taking wrong turn 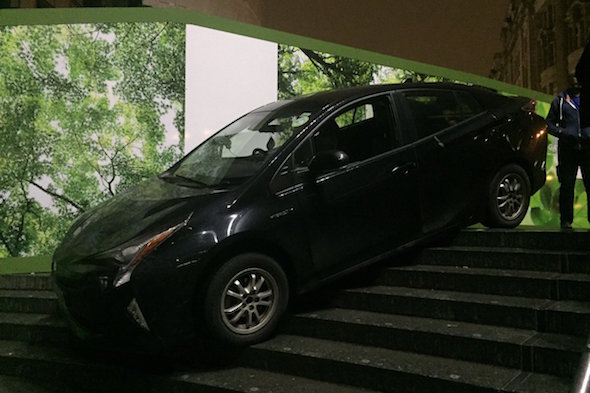 A confused driver was left red-faced after taking a wrong turn and ending up on a flight of steps in London.

The motorist was reportedly driving through the city early on Sunday, when a wrong turn on to a pedestrianised area sent his black Toyota careering down the steps.
Unfortunately, the vehicle became stranded on the flight of steps at Broadgate Circle near Liverpool Street station, and the City of London Police were called.

A spokesman for the force said the driver was given a warning for driving without due care and attention.

He added: "The male was given a breath test at the scene but it came back negative."

At 2.38am, the force's Twitter account tweeted: "A lot of calls for @CityPolice tonight - this 1 is definitely most obscure! Driver reported for driving without due care #CityPoliceResponse"

A photo of the stranded black Toyota Prius accompanied the tweet, and further pictures followed on social media throughout the day.

One Twitter user, Joe Gorf, shared photos of the taped-off car at 12.10pm that day. He wrote: "Trying a new shortcut into Liverpool Street?"

The car remained on the steps for 12 hours before it was recovered. According to one social media user, the vehicle is registered as a private hire car, leading to suggestions that it could be an Uber.
Tags
Read Full Story Click here to comment