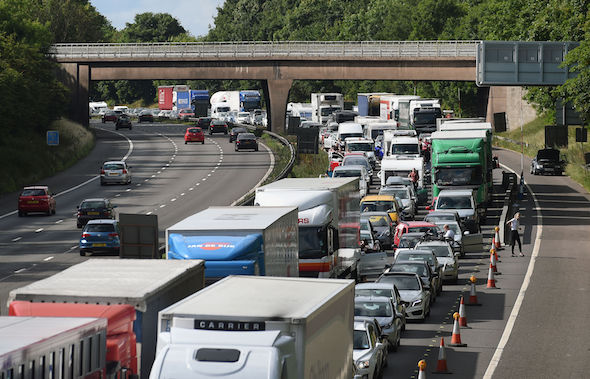 Traffic has reached record levels as more miles than ever are covered on British roads.

Department for Transport figures reveal that 320.5 billion miles were travelled by vehicles in 2016, which is two per cent more than the previous peak in 2007.
The figures, which also mark a 1.2 per cent rise over the number of miles travelled in 2015, prove just how congested our roads have become.

Traffic on motorways and rural A roads saw increases of 2.1 per cent and 2.5 per cent over the previous year respectively.

"Motorists, who are paying in excess of £40 billion a year in overall motoring taxation, will find it incredibly frustrating that they are having to deal with clogged up roads with these provisional figures showing that traffic levels hit an all-time high in 2016.

"While the Government has made progress in investing in the strategic road network, motorists will be unforgiving if the same attention isn't given to local roads."

The biggest growth came from van traffic, which increased by 3.4 per cent, while heavy goods vehicles drove 2.8 per cent more miles than in 2015. Car traffic was up 0.7 per cent.

Campaign for Better Transport campaigner Bridget Fox said: "Given what we now know about the country's lethal and illegal levels of air pollution, more than ever we must see urgent action taken to halt the growth in traffic levels on our roads."
Tags
Read Full Story