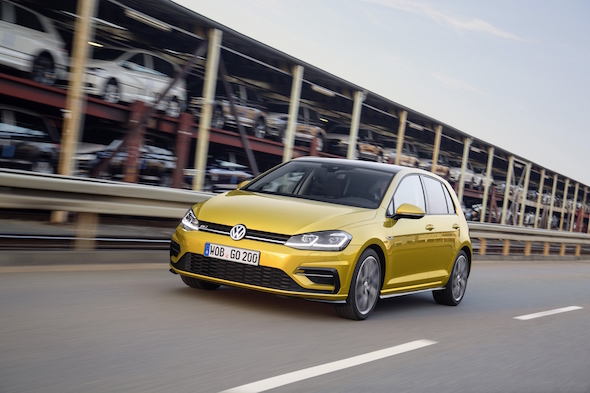 'If it ain't broke, don't fix it' goes the saying. It appears Volkswagen has taken note, with the launch of the subtly updated mk7 Golf. While changes have been made throughout the vehicle, including a sharper exterior design, improved cabin technology and the option of a new petrol powertrain, the Golf retains the iconic styling cues and driving feel that motorists know and love.

AOL Cars went to the Spanish island of Mallorca to put the new model to the test.
What is it?

This is the mk7.5 Golf, launched five years after the seventh generation of the family hatchback was revealed to the world.

While the update is subtle, it was well overdue, according to Volkswagen. And it's hard to disagree, especially when you compare the level of technology in the new model to the old. In this guise, the Golf has become the first compact car to feature gesture control, and has received a new turbocharged petrol engine – the 1.5 TSI Evo.

The Golf's familiar appearance has also been slightly tweaked, with newly designed front and rear bumpers, LED headlights to replace the previous Xenon units and full LED tail lights as standard across the range. New colours, wheels and trims are available on the 2017 model, which retains its existing specification levels.

Volkswagen plans to introduce more powertrains to the mk7.5 Golf throughout this year, but at launch the only new unit was the 1.5 TSI Evo.

The former system allows for two of the four cylinders to be effectively turned off in light load conditions, thus improving fuel economy, while the latter is a stop-start system and a mode for storing braking energy (regenerative braking).

A BlueMotion version of this engine, producing 128bhp, will follow later this year.
The GTI and GTI Performance units have received a power boost, to 227bhp and 242bhp respectively.
Also new to the Golf is the seven-speed DSG (dual-clutch gearbox) transmission, which will gradually replace the current six-speed unit.

First Drive: Volkswagen Golf
Up Next

Included in Volkswagen's newly introduced range-topping "Discover Pro" infotainment system is the aforementioned gesture control. This technology, which was previously only seen in larger, more premium, models, allows the driver to adjust settings including sound and song with just a wave of the hand.

Meanwhile, the other available infotainment systems in the model have received updates including new designs and larger touchscreens.

Behind the steering wheel, in place of analogue clocks, is a 12.3-inch Active Info Display – similar to Audi's Virtual Cockpit.

Safety has also been bolstered in the 2017 model, with the addition of new camera- and radar-based aids, including Traffic Jam Assist, Emergency Assist, Front Assist and Trailer Assist. However, unfortunately these features are not standard across the range.

The Golf is up against the same rivals as it was in its previous guise, including the Ford Focus, Vauxhall Astra and more premium Audi A3. However, with the new top-of-the-range tech, it stands head and shoulders above the crowd.

We got behind the wheel of the top-spec Golf SE Nav with the 1.5-litre TSI Evo powertrain. This superb engine is only improved when combined with Volkswagen's new super smooth seven-speed DSG transmission, which costs almost £1,500 more than the manual box.

Power is plentiful at low revs, with the model taking 8.1 seconds to accelerate from 0 to 60mph, before topping out at 134mph.

A selection of driving modes includes the ever-capable 'Normal', in which the car conquers bumps with ease and boasts remarkable body control. The more potent 'Sport' mode gives the Golf an entirely different feel, especially when combined with the optional Dynamic Chassis Control, which adjusts the suspension damping. Acceleration is increased hugely, and wheel-mounted gear paddles allow the driver to exploit the TSI's full power.

The subtle updates bestowed upon the seventh generation Golf by Volkswagen have brought the model in line with, and above its competitors. The exciting new petrol powertrain and advanced cabin technology is likely to attract new customers to the hatchback and with prices an average of £650 less than the outgoing model, it appears to be a steal. Europe's most successful car looks set to become even more popular.