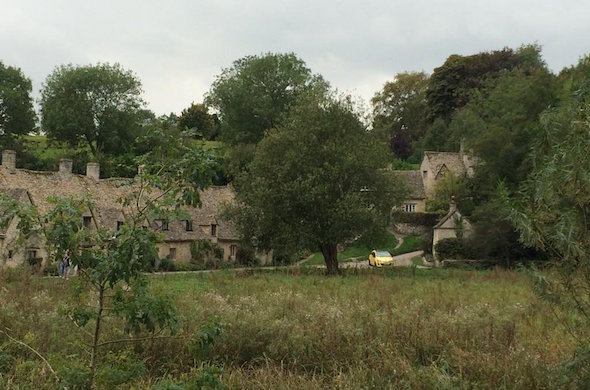 Vandals have written off a yellow car that tourists have claimed ruins the view of one of Britain's most picturesque villages.

Pensioner Peter Maddox parks his Vauxhall Corsa outside the 14th-century cottage he owns in the Cotswolds village of Arlington Row, which is owned by the National Trust.
The cottages attract tourists every year because they are the oldest inhabited houses in the UK and are depicted in the British passport.

But many visitors took to social media last year to complain about the car ruining their photos.

Maddox insisted he had nowhere else to park the car and had talked to his neighbours who were happy for him to leave his car where it was.

However, the banana-coloured hatchback was targeted by vandals last week. They scratched the word 'move' into the bonnet, scratched every panel and smashed the rear windscreen and driver's side window.

A local garage quoted £6,000 to repair the car, which the 84-year-old owner believes will make it a write-off. Maddox says that if that is the case, he'll buy a lime green Corsa instead.

Marie Kraus, his daughter-in-law, told The Telegraph: "Peter is understandably upset at the loss of his car and his independence, but he is also very fond of his lovely yellow car.

"Everyone in the village is very supportive. It is horrible to think whoever has done this has come out of their way down this little road to do something like this. It will be a struggle to get another car. It will leave Peter out of pocket."
Tags
Read Full Story