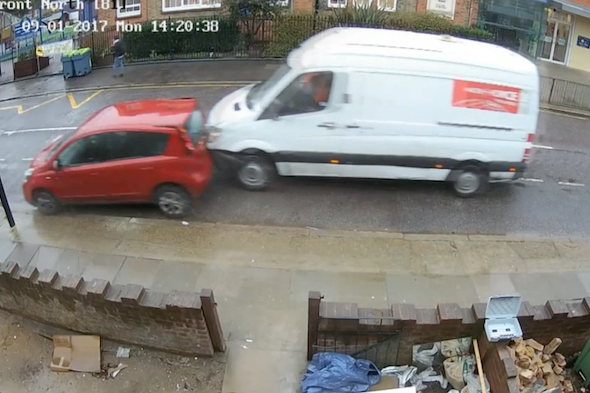 An inattentive delivery driver smashed his van into the back of a parked hatchback before fleeing from the scene, and the whole thing was caught on camera.

Unfortunately for the courier, he hit a car owned by a CCTV expert who has four cameras recording the front of his house in Stratford, East London.
Video shows the van approaching from the right as the driver starts drifting left. Without even attempting to stop, he smashes into the back of the parked Nissan Note and sends it skidding down the road.

After a moment's hesitation, the van driver reverses and makes a break for it. He doesn't appear to notice that his bumper fell off in the crash, leaving his number plate at the scene of the crime.

Robert Harpery, the car's owner, said that the van driver had been in touch to apologise and Parcel Force had offered to pay for the damage.
Tags
Read Full Story