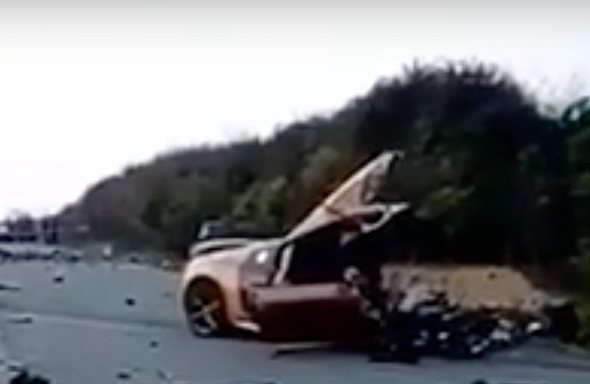 A Chinese driver who pushed his Audi R8 to more than 200mph died alongside his filming passenger in a crash shortly afterwards.

Footage of the high-speed driving and photographs of the crashed car have now been shared online.

The incident reportedly took place in Liujiang, in China's Anhui province, on January 28.

While the driver pushed his supercar to its limit, the passenger filmed out the front window, occasionally turning the camera to the dash to prove the car's speed.

In the clip, the car can be seen dangerously swerving around other vehicles and even using the hard shoulder to undertake a lorry.

Both the driver and the passenger were reportedly thrown from the vehicle and killed in the collision.

Photographs of the aftermath show the front of the burnt orange car completely caved in and the roof peeled back.

Chinese social media users have pointed out that the R8 doesn't appear to have a number plate, which suggests the vehicle was unlicensed and uninsured.