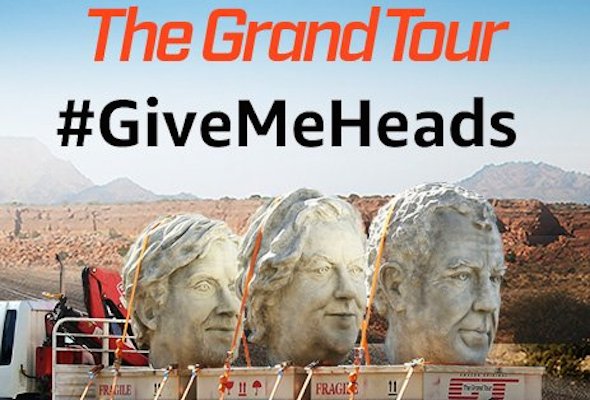 Grand Tour fans in the UK were offered a unique chance by Amazon to display one of the three giant heads of Clarkson, Hammond and May in their garden.

The giant busts of the ex-Top Gear trio have been seen all over the world since they were cast last year.
News reports have shown them in Sydney, Australia, Los Angeles, America, and most recently, Britain's capital.

The 'Give Me Heads' competition required fans to tweet a photo of their garden, or plot of land on which a head could stand for two weeks, accompanied by the GiveMeHeads hashtag.

Since the competition went live on Thursday, thousands of entries have been seen on Twitter. From tiny, overgrown gardens, to the more comical suggestions of The Mall in front of Buckingham Palace and even building sites, it appears everyone wants to host a head.

On Tuesday last week, the Grand Tour Twitter account was flooded with photos of the trio being unloaded from a plane and transported through central London.

An accompanying photo showed Clarkson's bust on a GT plinth, May's hanging from a crane, and Hammond's being crated up.

The competition was open until midnight last night, and entries will be reviewed by a panel of judges from Amazon Instant Video Limited tomorrow. The three winners will each receive a head for two weeks, plus an Amazon Echo, Fire TV stick and 'The Grand Tour' T-shirt.