More than 100 puppies rescued after van transporting them crashed 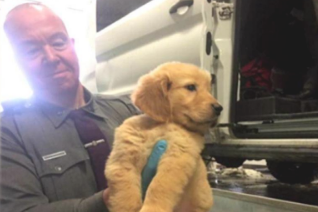 More than 100 puppies had to be rescued from a New York highway after the van carrying them overturned.

The terrifying ordeal happened while the animals were being delivered to pet stores to be sold.
Police said the driver of the box van they were being carried in was speeding, which caused her to lose control and overturn.

Emergency services were joined at the scene by the Society for the Prevention of Cruelty to Animals (SPCA), which took the puppies into shelter so they could be sold another day.

Two of the puppies suffered broken bones and five more had minor injuries, but the majority of the animals escaped unharmed.

An SPCA employee said: "Under the circumstances they all seem really happy and they're comfortable here.

"We're happy that we could be here to help them."
Tags
Read Full Story