America's most expensive house comes with its own car collection 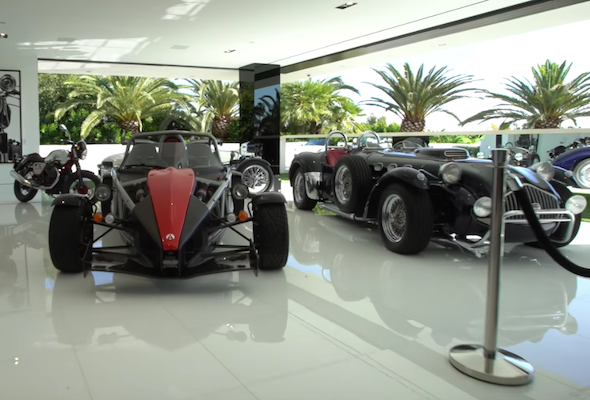 A house that has gone on sale in America for an incredible $250m (£201m) boasts a surprising feature – an 'auto gallery' complete with its own car collection.

The newly built 924 Bel Air Rd in California is on the market for a whopping quarter of a billion dollars, which eclipses the previous record holder, a $195 million mansion in Manalapan, Florida.
According to CNBC, included in this price is an extensive collection of vehicles, comprising 10 motorcycles, 12 cars and even a helicopter! In total, this collection is thought to be worth an estimated $30m (£24m).

The dozen cars are among the rarest, fastest and most expensive in the world, and include a one-of-a-kind Pagani Huayra worth more than $2m (£1.6m) and the famous "Von Krieger" 1936 Mercedes 540 K Special Roadster, which is worth more than $15m (£12m).


Meanwhile, the house's staff – who will come free with the property for two years – will drive a new white Ferrari 488 and a bespoke yacht-themed Rolls-Royce Dawn.

Unsurprisingly, it took four years to build by a 300-strong workforce. But the resulting home is something of epic proportions.

Bruce Makowsky, the extremely wealthy developer behind the home, said: "I wanted to redefine what super-high-end luxury homes are all about.

"I wanted to break all the moulds. The level of quality and attention to detail in this house is unsurpassed. And I wanted to create the greatest feeling that you can have being at home."

Of the vehicle collection, he added: "Most of these cars are one-of-a-kind originals that you can only get with this house."
Tags
Read Full Story