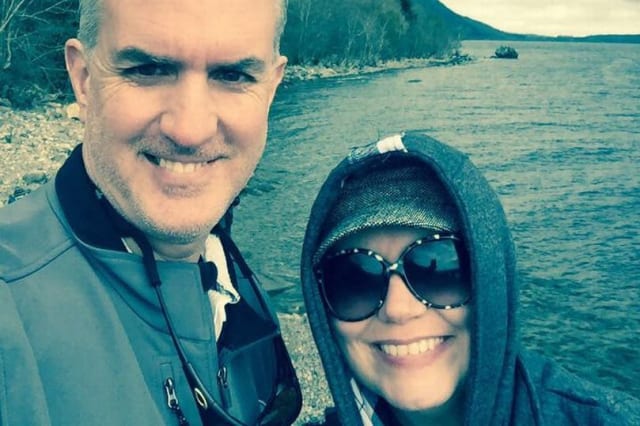 A devastated US tourist has won a Loch Ness Monster photograph competition - with a picture snapped on a trip to Scotland with her late fiance.

Natasha Heidlage snapped the mystical photo during a break in Scotland with Matt Smeller.

But just three months later the 47-year-old airline pilot died after contracting a virus back home in Dallas, Texas.

Natasha, 42, yesterday dedicated her £1,000 win in the annual William Hill Award for the 'best Nessie sighting' to tragic Matt.

She explained: "This contest has meant so much to me. Matt was so excited by the picture.

"He knew it was unusual and thought it was cool that we might have captured the Loch Ness Monster.

"He told me, 'You have got something here', and we showed the picture to the couple who ran the B&B and they said, 'You need to submit this to the contest'.

"We had another picture with something like a long neck sticking out the water, but I didn't send that in.

"Matt liked Scotch and we'd gone to visit the distilleries but Loch Ness was my idea.

"I was just snapping photos. I didn't see anything with my naked eye.

"Later in the day I was going through the pictures and saw the dark image in the water.

"I was startled because it was overcast and there was nothing that could have been behind me to project a shadow."

Natasha - who dated the pilot for seven-and-a-half years after meeting at work - told how Matt was stuck down with West Nile Virus after being bitten by a mosquito in their garden.

She said: "We were active outdoor people and Matt was in perfect health and never got sick.

"We got engaged after the Scottish trip and were going to get married this year.

"We had been looking for a meteor shower when he was bitten.

"The next day he got the flu. The neurological symptoms came five days after, the double vision and extreme dizziness."

Matt later on died from complications in September.

Natasha, who took her photo on May 1 last year, said: "I am an avid traveller and intend to return to Loch Ness with a friend.

"I'd like to find the Yeti next – there is more exploring on the horizon."

William Hill spokesman Rupert Adams said: "Hopefully Natasha will use her winnings to solve great American mysteries such as Big Foot or perhaps even a trip to Area 51."

11 PHOTOS
What visitors to the UK want to know, according to Google
See Gallery

What visitors to the UK want to know, according to Google
Up Next