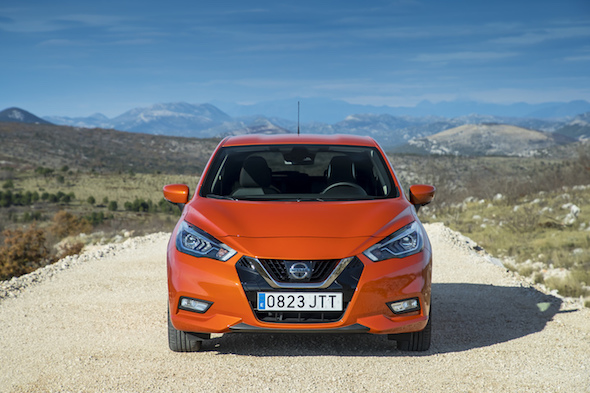 Nissan has come back with its fifth version of the Micra. However, this one is completely unrecognisable. In fact, some have even asked why it's called a Micra at all.

It's been rebuilt from the ground up, so we've tried it out to see if it's the remake we've been waiting for.
What is it?

It's Nissan's five-door, five-seat hatchback that turned 30 last year. However, it's longer, wider and shorter, has been given a completely new look and new engines have been introduced. In fact, everything on this car has been completely redesigned as the marque attempts to climb up the ranks in the B-segment.

The Nissan Micra is available with two engine options at the moment - a 0.9-litre turbocharged petrol and a 1.5-litre diesel - both producing 89bhp. From March, when the car goes on sale, there will be a 1.0-litre naturally aspirated engine, producing 74bhp, coming to the UK, but details for that are limited. Currently it's only available with a five-speed manual gearbox too. The 0.9-litre petrol engine will achieve 64.2mpg with stop-start technology fitted, according to Nissan, and produce 99g/km of CO2. Its diesel counterpart will do 88mpg while producing 85g/km of CO2.

There's a lot more than you'd expect from the Nissan Micra, which is packed with options to attract younger drivers. Base spec starts at £11,995 but you don't get a great amount of extras. However, if safety is important this is fitted with emergency braking as standard. The mid-range Acenta spec with the 0.9-litre petrol engine will be the most popular model, which is priced from £14,995. This adds the free option of 16-inch alloys, cruise control, body-coloured trim and the seven-inch touchscreen infotainment system.

Apple CarPlay is currently available on the car, while Android Auto is expected to be launched later in the year. The Micra's party piece is its 360-degree Bose sound system which works using speakers in the dash and headrest. This comes with top-spec Tekna cars or can be added for £500. Another first for small Micras is the vast safety pack available. This includes lane departure assistance, emergency braking, traffic sign recognition and blind spot warning.

First Drive: Nissan Micra
Up Next

The Nissan Micra is looking to take its place in the top 10 of the B-segment. It's admitted that its main competition at the moment includes the Skoda Fabia, Citroen C3, Audi A1, Seat Ibiza and Hyundai, but that's not to say it's not looking to steal car buyers from the likes of the Ford Fiesta and its sister the Renault Clio.

The car's handling is one of the best in its segment, as it corners with absolute ease even on the tightest of bends. There's more clever kit going on under the car's skin, which constantly works to keep the car planted on the road. At the moment it's only available with a five-speed manual, and there's no word on whether an auto will be available down the line, but it's comfortable to use even if it doesn't come close to premium competition. Both the diesel and petrol are competent cars, although not the most dynamic, but the price of the petrol will make it more appealing to most drivers. The 0.9-litre petrol will achieve 0 - 60mph in 11.9 seconds and continue to 109mph, while the diesel will go marginally faster to 60mph in 11.7 seconds, reaching 111mph.

The new Nissan Micra is finally a great alternative to what have become the staples of the small hatchback market. It's got the looks, the drive and the economy to become a serious rival worth considering. Take into account the infotainment options available and it makes an extremely strong argument for itself to those not particularly concerned about an inspiring driving experience.