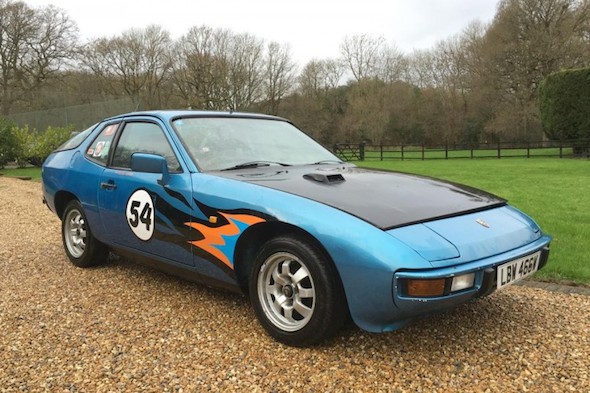 Do you fancy buying a cheap Porsche? Well, you better look away now, as although this car featured in a Top Gear 'cheap car' challenge, we expect it to be anything but when it goes to auction later this month.

Back in 2004, the then-Top Gear trio of Jeremy Clarkson, James May and Richard Hammond were each given £1,500 by the show's producers to spend on a 'cheap Porsche' in which they would face a series of challenges.


While James May chose a 944 and Jeremy Clarkson a powerful 928, Hammond opted for an unloved 924, spending only half of his budget on the 23-year-old model.

Now, 13 years later, that same car is to be offered at the Coys Autosport auction with no reserve.

The entry-level model originally left the factory in a striking metallic blue. However, in the segment, which featured in Series 5: Episode 6, Hammond used the remainder of his £1,500 to jazz it up, painting the bonnet black and adding an air intake and flame graphics behind the front wheels.


Also in the episode, Hammond raced his co-presenters from London's financial district to Brighton, arriving together with May – Clarkson eventually turned up on the back of an AA truck.

The Stig then hopped behind the wheel of each of the cars to lap the show's test track, before the trio attempted to sell them for more than their original budget. While Clarkson made £1,800 and May £1,400, Hammond was unable to sell his at all.

But don't worry; it hasn't stood idle for more than a decade. According to its Coys listing, LBW 466W was later sold privately and has since competed in a number of Sprint events in the South East of England.

If you're interested in owning this genuine piece of Top Gear history, it will be auctioned at Birmingham's NEC this Thursday, January 14.