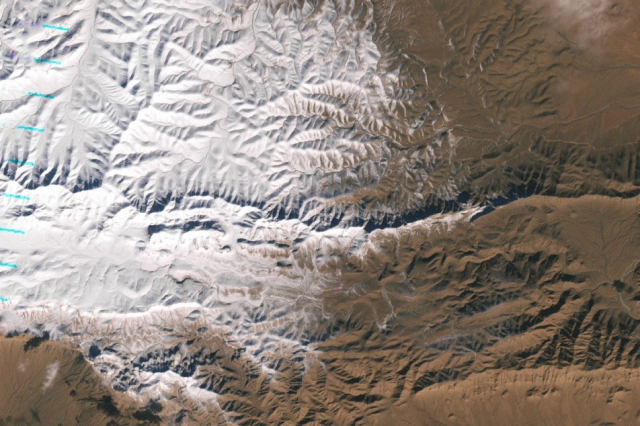 The photos taken from above appear to show a mountainous region covered in snow but are in fact snow dunes in the vast desert.

They were captured by the Enhanced Thematic Mapper Plus on the Landsat 7 satellite on 19 December in a region near the border of Morocco and Algeria, south of the city of Bouarfa.

An amateur photographer also captured the historic scene near the Algerian town of Ain Sefra.

Karim Bouchetata said: "Everyone was stunned to see snow falling in the desert, it is such a rare occurrence. It looked amazing as the snow settled on the sand and made a great set of photos. 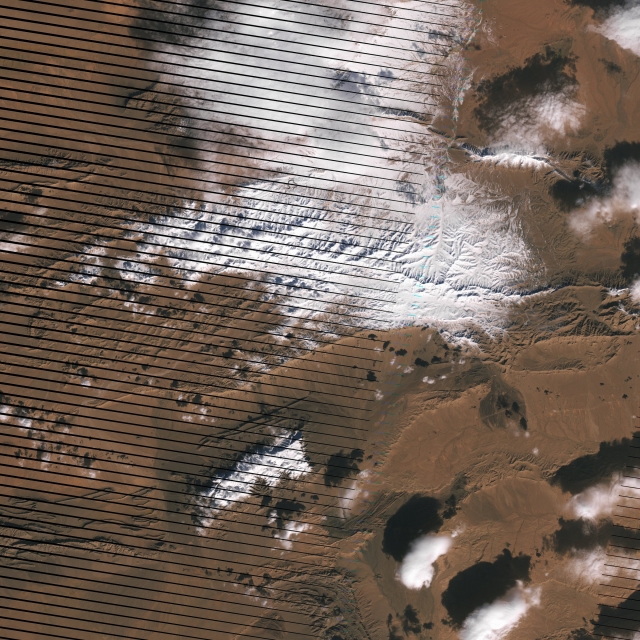 "The snow stayed for about a day and has now melted away."

Then, the snow storm lasted just half an hour. But this time flakes stayed for about day in the town. 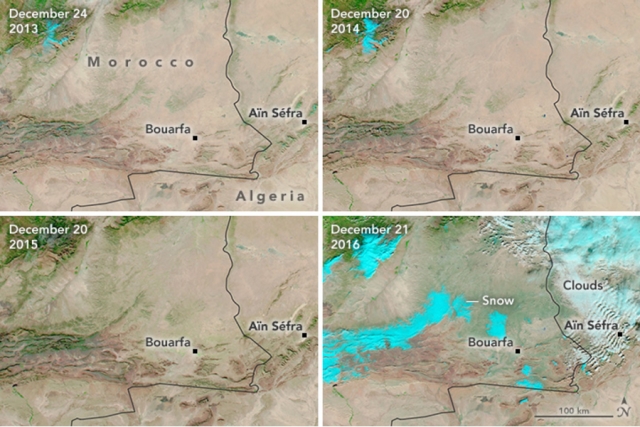 The Sahara covers most of northern Africa and has gone through shifts in temperature and moisture over the past few hundred thousand years.

It is one of the hottest and driest areas of the world today, although it is expected to become green again in about 15,000 years.

10 PHOTOS
Places where it never gets cold
See Gallery

Places where it never gets cold
Beautiful Hawaii boasts world-class surfing, spectacular waterfalls and active volcanoes, as well as a hot climate. Temperatures at sea level generally range from highs of 29 to 32C during the summer months to 26 to 28C during the winter months. Rarely does the temperature rise above 32C or drop below 18C. To see snow in winter, you will have to head for the islands' highest mountains.
You won’t get snow in Puerto Rico. Only palm trees, white sand, sunshine and year-round temperatures of 24 to 31C. The tropical climate can get humid in the summer months and Puerto Rico experiences the Atlantic hurricane season (June to November) with a hurricane passing the vicinity of the island on average every 11 years. Only one Category 5 hurricane has struck the island since 1851, the Lake Okeechobee Hurricane of September 1928.

Like the rest of the Caribbean, the tiny island of Saint Lucia boasts a warm, tropical climate all year round. Trade winds stop things becoming too hot with temperatures ranging from 21 to 32C. The wet season is generally at the same time as the Atlantic hurricane season (June to November). The most humid weather can be found in the rainforest in the centre of the island, while a hike to the Pitons will help you cool off.

Sitting on the eastern coast of Central America, Belize enjoys a comfortable tropical climate with an average yearly temperature of 29C with only about 4C between the coolest (January) and warmest (May) part of the year. The coastal breezes help ease high humidity levels. With consistent temperatures all year round, Belize only has two seasons, the wet (from June to December) and the dry (February to May).

Separating the Caribbean Sea from the Gulf of Mexico, the Yucatan Peninsula enjoys warm weather all year round at a steady 27C and seasonal fluctuations of just 4 to 6C either side. It does lie within the Atlantic Hurricane Belt and with almost uniformly flat terrain is vulnerable to large storms coming from the east.

Lying just to the south of the Equator, this archipelago of 115 islands in the Indian Ocean stays warm and humid throughout the year with temperatures rarely dropping beneath 24C or rising above 32C. The seasons are controlled by trade winds and the Seychelles does not experience extreme weather conditions.

Durban, the largest city in KwaZulu Natal, boasts an average of 320 days of sunshine a year. Temperatures range from 16 to 25C in winter and from 23 to 33C in summer, with January the hottest and most humid month. The warm Mozambique current flowing along the coast means the water temperature rarely falls below 17C even in winter. The city is occasionally affected by tropical storms during the cyclone season (November to April).

These picturesque islands in the heart of the Great Barrier Reef enjoy a subtropical climate with an average annual temperature of 27C and lots of sunshine. Summer in January sees an average temperature of over 30C in Australia's Whitsunday Islands, with the water temperature not far off.

You’ll never see snow on the tropical island nation of Fiji in the South Pacific. Maximum temperatures rarely move out of the 26 to 31C range all year round. Southeast trade winds from March to November bring dry weather and the rainy season runs from December to April, which overlaps with the tropical cyclone season.

The temperature hardly ever changes in the Maldives, averaging a warm and humid 30C throughout the year. That’s thanks to their equatorial location, which also keeps them out of the firing line of cyclones. The tropical equatorial climate has two seasons, with the highest temperatures occurring during the dry season (November to March).