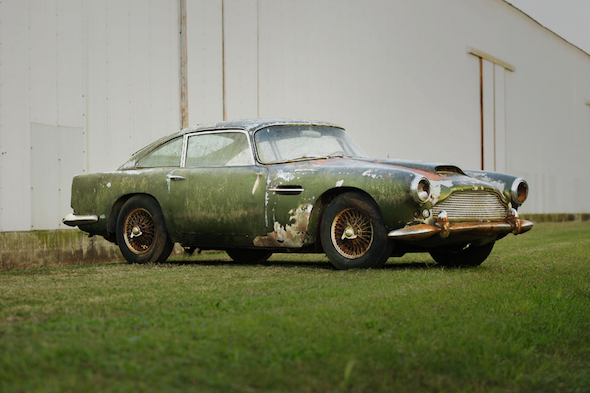 An Aston Martin DB4 which has stood immobile in Massachusetts woodland since the early 1970s looks set to make up to £385,000 at auction next year.

The 1961 US-spec model was built in Britain before being shipped to America. As one of the most powerful and desirable models of its time, the reason for its apparent abandonment is a mystery.
Chassis no DB4/510/L was one of just 1,113 DB4s built between 1958 and 1963. The models were built with a new DOHC 3.7-litre inline six-cylinder engine, which featured twin SU HD8 carburetors and produced 240bhp at 4,500 rpm.

A four-speed manual transmission put this power to the road, allowing for a top speed of 140mph. Impressively, the car could also go from a standstill to 100mph and back to stopped in less than 30 seconds. Suspension was accounted for by an independent front suspension and live rear axle with coil springs, while four-wheel servo-assisted hydraulic disc brakes also featured on the 98-inch wheelbase car.

After being in the ownership of official West Coast Aston Martin distributor, Charles Hornburg for a year and a half, the model was sold to its first owner, the famed voice actor Dallas Williams.

William's name disappears from the registration documents from 1963, and the engine number changes, suggesting that the model received a new unit.

By the early 1970s, the DB4 had made its way to Massachusetts and was parked in woodland outside of its owners home, where it sat, slowly decaying until recently.