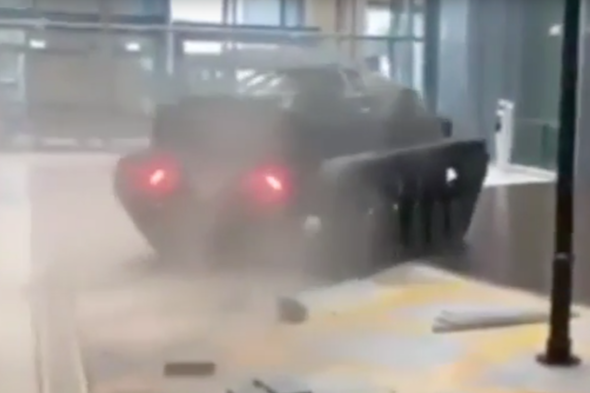 The latest stunt to have taken place during filming of Clarkson, May and Hammond's The Grand Tour appears to be the most destructive yet.

While filming the series finale in Dubai, United Arab Emirates, Clarkson crashed a large tank through the wall of the city's famous shopping mall.
Amateur footage catches a shout of 'Take two!' before the tank smashes its way into the mall through a plasterboard wall, before coming to a stop.

Onlookers appear nonplussed by the disturbance, leading to suggestions that the mall had been closed for the stunt, and those inside were actors.

Footage reportedly also shows the tank driving along Sheikh Mohammad Bin Rashid Boulevard before it smashed into the luxury shopping centre, confusing many residents and tourists, who were unaware that the ex-Top Gear presenters were responsible for it.

While in the UAE last week, the Grand Tour crew were also spotted pitching the studio tent at the foot of the iconic Burj Khalifa.