An angry homeowner got revenge on a van driver blocking his driveway by pinching his keys - and hiding them for six hours.

Andrew Krasucky, 26, spent two hours in a cafe before filming the frustrated workman for a further four hours until it started getting dark.

The crane driver, from Hounslow, west London, decided to 'punish' the tradesman after going out to confront him, only to find the van left unattended with the keys in the ignition.

Locking the van behind him, Andrew then spent the rest of the day tormenting the tradesman.

Rather than handing them over when he got back from the cafe, the crane driver explained how he decided to exact his own 'punishment' and filmed the man looking for them for another four hours until it was getting dark. 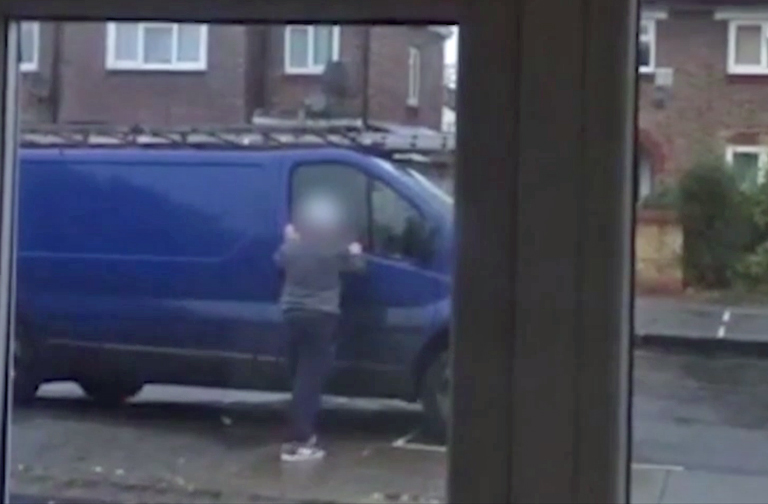 He even repeatedly pressed the central locking on the keys so that the hapless tradesman became convinced they were in the van and proceeded to clear out the hundreds of tools.

Andrew said: "It was really selfish and thoughtless of him, especially because he had the option of a space. You can't do that. It's unacceptable.

"It was all about punishing him. I don't think he understood what really happened. But deep in my mind I will remember this occasion for a long time.

"I was very happy as I didn't make him pay a fine [by trying to get him in trouble], it was just one of life's pleasures to punish him for ignoring other people, parking outside our house and not caring.

"I was very annoyed as there was a free space and he didn't bother to use it despite it being just a few feet ahead of him.

"He just dumped it outside my home, which made me very angry. My partner would not have been able to get up the drive when she came home."

Pictures clearly show the free space just feet in front of the van, which is instead parked on the dropped kerb outside Andrew's house.

Andrew eventually tossed the keys outside on the ground near the van.

The driver found them moments later but to Andrew's disgust simply unlocked and then locked the vehicle and sauntered off.

Andrew said: "I couldn't believe it. So I went out again and asked him whether he was going to move it and and he said: 'Oh yes, okay.'

"I was so angry that he still didn't move it even when he had the keys. I thought 'just go away.'"
The van driver took the hint and drove off.
Tags
Read Full Story