Angry VW Dieselgate owners are stripping their cars before returning them 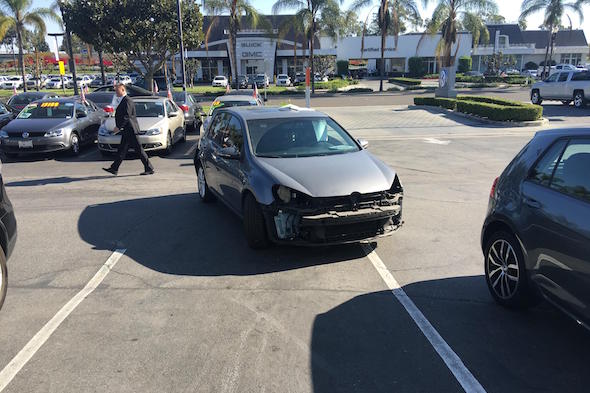 As part of Volkswagen's $14.7 billion Dieselgate settlement in America, the company had to offer to buy back any cars that were affected.

However, some eagle-eyed owners have noticed that the only requirement stated in the 'buy back' contract is that the car must be in working order.
The US Environmental Protection Agency's 'Consent Decree' states that the vehicle's condition must be 'operable', meaning it must be able to move under its own power.

Here's the legal definition of that term, as outlined in the decree:

"'Operable' means that a vehicle so described can be driven under its own 2.0-litre TDI engine power. A vehicle is not Operable if it had a branded title of 'Assembled,' 'Dismantled,' 'Flood,' 'Junk,' 'Rebuilt,' 'Reconstructed,' or 'Salvaged' as of September 18, 2015, and was acquired by any person or entity from a junkyard or salvaged after September 18, 2015."

Disgruntled VW owners looking for a way to get back at the German manufacturer have been removing non-essential parts that they can then sell separately.

One owner posted a photograph on Reddit showing their Golf with no front bumper or headlights, claiming they had no trouble handing it in and the condition of the car didn't affect the amount VW paid them.

Other owners have shared stories of removing everything from wing mirrors to radios – even floor mats and seats aren't safe from the most fed-up drivers.
Tags
Read Full Story