Last-ever Bugatti Veyron to go under the hammer 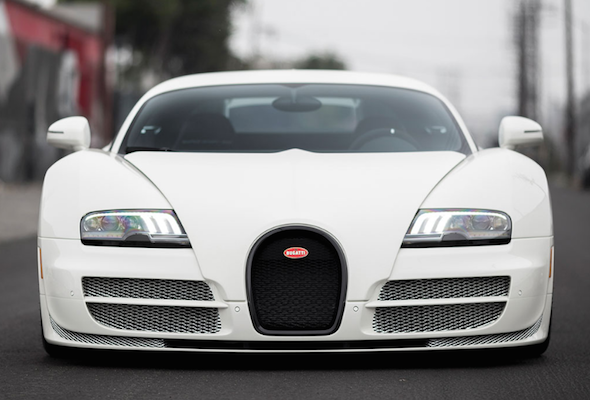 The final Bugatti Veyron coupe ever made is going up for auction in January. The remarkable Super Sport version is offered with near-delivery mileage and was used as a display car at the Geneva motor show.

Designed from the outset to be a showcase of engineering, the Veyron was the brainchild of former Volkswagen Group chairman Ferdinand Piëch. He wanted to build a car that made no compromises to be the fastest, most powerful car in the world – he challenged engineers to build a vehicle capable of 249mph and with 1,000hp.
In 2005 his dream was realised, and the Bugatti Veyron 16:4 rolled off the production line. It had an 8.0-litre, quad-turbocharged W16 engine that produced an incredible 987bhp (although it achieved 1,001 metric horsepower as used in Germany, meaning Piëch's challenge was met) and could propel the car to 253mph.

However, Bugatti wasn't finished with the Veyron and continued to work on producing more power. The Super Sport version, seen here, was the result of this quest for extra performance – it produces 1,183bhp and has a top speed of 257mph.

Veyron Auction
Up Next


To achieve this, Bugatti fitted two extra fuel pumps, replaced the 10 radiators and four turbochargers with bigger versions, and reduced back pressure in the exhaust. The Super Sport was also lightly restyled to allow for the different aerodynamics needed at higher speeds.

This car is chassis number 300, meaning it is the last Veyron coupe ever made. It has less than 400 miles on the clock, with records showing that 269 of those miles were travelled by Bugatti engineers on pre-delivery test runs. It has received regular dealer maintenance since its first delivery in August 2012, despite barely moving in that time.

The Bugatti Veyron Super Sport 300 goes under the hammer at RM Sotheby's Arizona sale in January 2017. Although it's not listed with an estimate, when this car went up for auction last year it was bought by the current owner for £1.8m.
Tags
Read Full Story Click here to comment