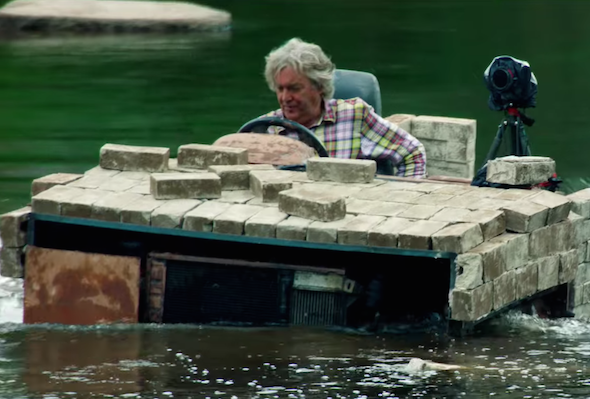 Episode four of The Grand Tour is to go live tomorrow, and a teaser video has given a taste of just what's in store.

This episode, entitled Enviro-mental sees Clarkson, Hammond and May head back to Whitby, which was also the chosen location for the third episode.
Against a dull British backdrop, the trio are challenged to create cars made of sustainable materials, and then take part in a 'green motorsport event'.

If you're thinking that this sounds like a recipe for disaster, then you're probably right.

While Clarkson decks his vehicle out in animal fur – complete with what appear to be horse ear wing mirrors – May's brick-laden vehicle is seen sinking into a lake.

Meanwhile, Hammond appears to be behind the wheel of a Fred Flintstones--esque twig-mobile.

All will be explained in the latest instalment of the show, which will go live on Amazon Prime at 12am tomorrow.