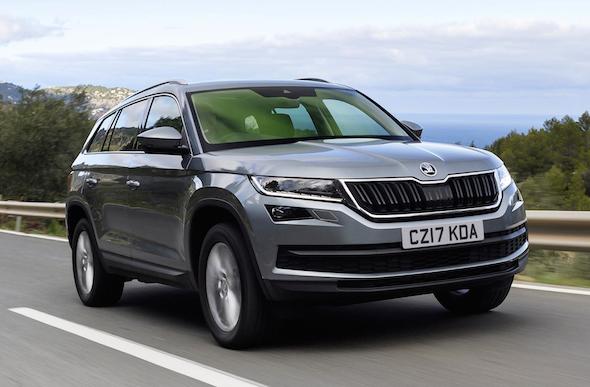 This is a huge car for Skoda. Tapping into the ever-flourishing SUV market, the Kodiaq aims to give consumers a large, spacious and comfortable vehicle - but for a much lower price than those found with more premium rivals.

Skoda is breaking into a completely new segment. Well-known now for making reliable and well-priced cars, the Kodiaq comes as an extension of that ethos. With the decline of MPV and rise of SUV, it's a natural progression for the company – but it has to get it right first time if it hopes to succeed.
What's under the bonnet?

Base-level S Kodiaqs get 17-inch alloy wheels, air conditioning and a leather multifunction steering wheel, plus DAB radio and smartphone connectivity but only available with the 1.4-litre petrol engine. It's not a bad deal with prices starting at £21,495. It's unsurprising as Skoda cars have always excelled at offering consumers quite a lot for their money. Middle-grade SE cars get 18-inch alloy wheels, cruise control and rear parking sensors. There's also an infotainment system controlled via an eight-inch display. Top-spec gets 19-inch alloys, Alcantara upholstery and full LED headlights.

First Drive: Sköda Kodiaq
Up Next

It can feel a little intimidating when you first get in – this a big car. However, once you're up and running, these reservations quickly disappear, as it's surprisingly nimble on weaving roads. The steering is quite light, which can make it feel a little nervous at high speeds, but you quickly get used to this. The advantage of such light steering is that the Kodiaq is a breeze to drive around town – although its size can sometimes be a hindrance.

The Kodiaq is one of the most attractive real-life prospects to come out of 2016. It's well priced, well specified and well finished, and that's a hard combination to ignore. Yes, it's not exceptionally exciting inside, but everything is put together well and feels like it's going to stand up to the kind of abuse that family life can bring to a car. Add to that a competitive entry price point, as well as a good range of engines and gearboxes, and you have a package that will really give its rivals a bit of a fright.