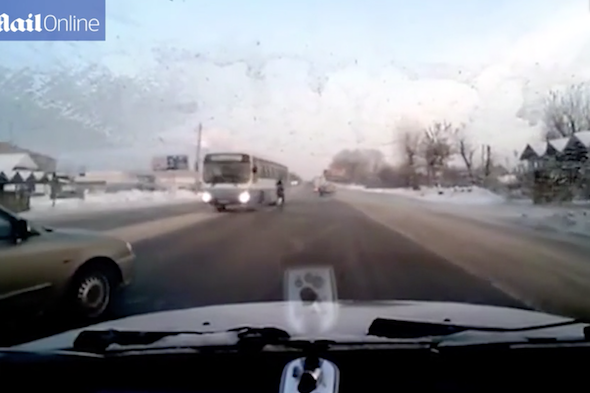 The shocking moment a woman cheated death as a bus swerved to avoid a stationary car has been caught on camera.

The close call was filmed in Chelyabinsk, Russia, as she crossed a snow-covered road. Traffic had stopped to let the woman pass, but a bus driver reacted late.
As she crosses the central reservation while carrying what appear to be bags of shopping, the bus can be seen swerving left to avert tragedy.

In a heart-stopping moment it appears to be heading straight for the woman, but the bus driver manages to keep the vehicle under control long enough to pass just behind her.

Despite coming inches from almost certain death, the woman appears completely oblivious to what has happened and continues casually walking across the road.

Fortunately, the drivers heading towards the incident spot the danger and brake in time to avoid hitting the woman or the bus.