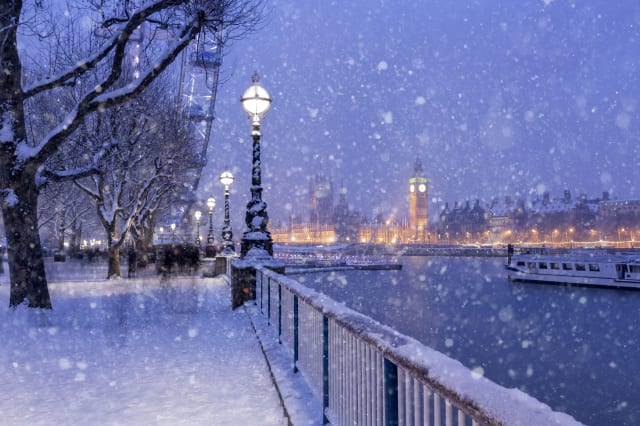 Many of us dream of waking up to a white Christmas - opening the curtains to find a blanket of white stuff sprinkled across the rooftops as far as the eye can see.

But in the UK, this picturesque Bing Crosby scene is actually quite rare

See also: Where to go for a White Christmas 2016

So how likely are we to see any snow this year?

According to the Met Office, for most parts of the United Kingdom, Christmas is only at the beginning of the period when it's most likely to snow.

It says we are more likely to see snow between January and March than in December.

Snow or sleet falls on an average of 3.9 days in December, compared with 5.3 days in January, 5.6 days in February and 4.2 days in March.

However, with predictions of temperatures dropping this week, the bookies are slashing the odds on a white Christmas for 2016.

Ladbrokes are now offering odds of 6/1 on snow falling in Cardiff on Christmas Day, with odds for at 2/1 for a White Christmas in Aberdeen, Edinburgh and Glasgow. There are better odds further south with 3/1 for Newcastle and Belfast, 4/1 for London, and 5/1 for Liverpool and Manchester.

At the time of writing, William Hill are offering odds of 3/1 in Aberdeen, 5/1 in Belfast, London, Leeds, Manchester, Liverpool and Newcastle, and 7/1 in Birmingham, Dublin, Bristol, Norwich and Cardiff.

The Met Office says that White Christmases were more frequent in the 18th and 19th centuries, even more so before the change of calendar in 1752 which effectively brought Christmas day back by 12 days.

Climate change has also brought higher average temperatures over land and sea and this generally reduced the chances of a White Christmas. 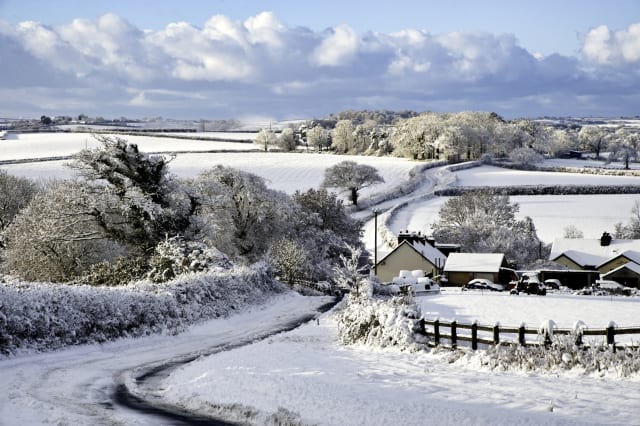 What is a white Christmas?
The definition that the Met Office uses to define a white Christmas is "for one snowflake to be observed falling in the 24 hours of 25 December somewhere in the UK".

So it doesn't necessarily have to look like the typical picturesque snow-filled scene to be classed as a white Christmas.

However, with the increase in betting on where will see a White Christmas the number of locations have increased and can now include sites such as Buckingham Palace, Belfast (Aldergrove Airport), Aberdeen (Pittodrie - Aberdeen FC), Edinburgh (Castle), Coronation Street in Manchester and the Millennium Stadium in Cardiff.

When will we know if it will be a White Christmas?
The Met Office can accurately forecast if snow is likely on any given Christmas Day up to five days beforehand.

Statistically, a snowflake has fallen somewhere in the UK on Christmas Day 38 times in the last 54 years, so we can probably expect more than half of all Christmas Days to be a 'White Christmas'.

The last widespread white Christmas in the UK was in 2010. It was described by the Met Office as extremely unusual, as not only was there snow on the ground at 83% of stations - the highest amount ever recorded - but snow or sleet also fell at 19% of stations.

We also had a White Christmas in 2009 when 13% of stations recorded snow or sleet falling, and 57% reported snow lying on the ground. 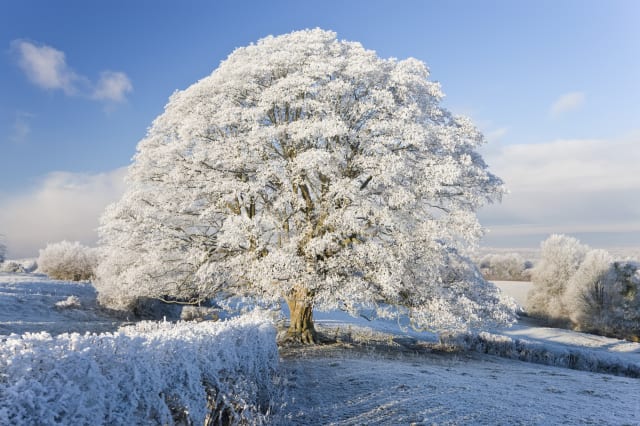 What is the current weather forecast for Christmas Day?
The UK outlook for 12 December to 26 December currently reads: "Unsettled weather may continue at first, especially in the north-west, before more generally settled conditions return as high pressure builds in more widely across the UK, as we approach the middle of December.

"This will bring drier than average conditions for many areas with lighter winds and an increased risk of frost and fog, especially where skies remain clear overnight.

"Some unsettled spells are possible but these are likely to be fairly limited. As a result of the drier weather it is also likely to be colder than normal."

No mention of snow just yet but that doesn't mean it won't happen. Fingers crossed!

10 PHOTOS
Where to go for a white Christmas
See Gallery

Where to go for a white Christmas

For a guaranteed white Christmas, head to the uber-cool ICEHOTEL in Swedish Lapland. At Christmas, the hotel is lit with twinkling lights, Christmas games are played on the frozen Torne River and there is a special torchlight procession to the village church for a traditional carol concert. Evenings are spent participating in snowy excursions and indulging in festive dinners. A four-night Christmas break departing on 22 December 2016 with Discover the World costs from £1,209 per person based on two sharing (1 night in an Ice Room and 3 nights in a warm Kaamos room), including flights.

Spend Christmas in a picture-postcard chalet in snowy Chamonix, one of the highest mountain ranges in the entire Alps, with sensational views of Mont Blanc. Chalet Rimaye is located in a quiet and peaceful area, within walking distance of local restaurants, bars and a general store, just five minutes’ drive from Chamonix town centre. The chalet for eight people has a spacious open plan lounge and dining area, perfect for Christmas dinner, and a log burning fireplace at its heart. There is a second lounge with a home cinema and flat screen, and the bedrooms have balconies with views out across the mountains. High Mountain Holidays offers a seven-night stay from 3,400 euros for eight people starting on 20 December 2016.

At the foot of the majestic Matterhorn, Zermatt is arguably one of the prettiest mountain villages in Switzerland and wonderful for a snowy Christmas escape. The traffic-free resort is accessed via railway and you can explore the village by modern electric taxis or traditional horse and carriage. On a romantic Christmas break, you can take a walk through the old town Hinterdorf, ride the highest-altitude, open-air Gornergrat Railway and ice skate on natural and artificial ice rinks dotted around the town. Kuoni offers a seven-night Ski Independence holiday at the four-star Hotel Mirabeau from £3,449 per person, including flights departing from London Gatwick on 22 December and First Class Swiss Rail transfers.

Harriniva's igloo-shaped Aurora Domes are the first of their kind in Finland, set on the banks of Lake Torassieppi and far from any bright lights. The transparent wall provides an exceptional view of the surrounding scenery and makes for spectacular stargazing and Northern Lights viewing. The luxury glamping tents invite guests to stay cosy under canvas and enjoy the warmth and comfort of an open fire. The Torassieppi Harriniva Hotels & Safari Taste of Lapland package starts from 828 euros per person and includes one night in an Aurora Dome, return airport transfers, full board, Christmas dinner, lunch in the ice restaurant, snowmobile and husky safaris, and snowshoe hire. Finnair flies to Kittilä airport from London Heathrow via Helsinki from £235 return.

This Christmas, you can go on the ultimate white Christmas holiday to Antarctica, where you will kayak among playful penguins, visit historic sites and working scientific stations, and camp out under the midnight sun. The eleven-day voyage with Aurora Expeditions departs from Ushuaia in Argentina before ending in Punta Arenas. The company only crosses the Drake Passage once on this trip, which means less time sailing and more time enjoying the Antarctica Peninsula highlights. Prices start from £7,122 based on a twin or triple share cabin on the 17 December 2016 voyage.

Thought Christmas on the slopes was too pricey? Think again. You can holiday in Verbier for as little as £599 per person. The snow sure resort is home to lovely chalet Mont Gele, which is located in the heart of the town. This ski-in and ski-out chalet can sleep up to 34 people for the ultimate festive break with your loved ones. Around Verbier, there are many celebrations, from a theatrical visit from Santa Claus to carol singing. On Christmas Day, enjoy a Christmas breakfast while opening your presents before heading out to the untouched slopes and returning to a four-course Christmas dinner with Champagne at the chalet. You can then relax in front of an open fire playing board games while your chalet host takes care of the washing up. Powder White offers a seven-night break at Mont Gele from 20 December 2016 for £599 per person, based on 34 sharing.

If you like the idea of a cosy log cabin to snuggle up in this Christmas, then you'll love staying in the wooden snow-covered camping pods at Camping Flims in Imboden, Switzerland. Located in the Flims Laax Falera region, which is a true winter wonderland, the campsite is surrounded by endless slopes and ski resorts making it ideal for winter sports. There is a restaurant on site and all guests receive complimentary bus travel between Falera and Fidazstops. The fully insulated and heated pods come in two sizes to accommodate groups of two, three or four and cost from £326.63 for four nights for three people over Christmas with Pitchup.com.

Want your white Christmas in the UK? Holidaycottages.co.uk is offering to make your dreams of a white Christmas a reality this year by working with expert teams to use state-of-the-art snow and winter effects right outside your holiday cottage front door, as well as a fully dressed Christmas tree, fairy lights and tinsel galore inside. Book by 11 December and you could have a white Christmas in North Devon at Forches Head Cottage, near Exeter. The delightful rural cottage offers serene countryside views, bright accommodation for a couple or family of four and welcomes two dogs. A seven-night stay costs from £505 starting on 23 December 2016. The White Christmas service starts from £6,000.

Set in the heart of UNESCO World Heritage Site Banff Springs, Fairmont Banff Springs is an incredible place to spend the festive period and guests are always guaranteed plenty of snow. The hotel offers unparalleled skiing in Canada and there are canyon ice walks, fishing and skating for non-skiers. This year's Christmas in the Castle activities include brunch with Santa, a wilderness walk and the Santa Claus Parade of Lights. Wexas Travel offers a five-night stay from £2,355 per person based on two sharing, including flights departing on 22 or 23 December 2016.

Enjoy a Christmas like no other on a journey to Arctic Norway at charming fjord-side hotel Malangen Resort, set amid magical winter landscapes outside the city of Tromsø. On an exciting five-day break, families experience husky and snowmobile safaris, soak up the unique culture and customs of the Sami people and visit remote wilderness camps in search of the Northern Lights. On Christmas Eve, guests are served a traditional Norwegian festive feast, followed by a visit from Santa Claus himself. Wexas Travel offers a Christmas holiday at Malangen Resort from £1,660 per adult and £1,055 per child, including return flights departing on 23 December 2016.