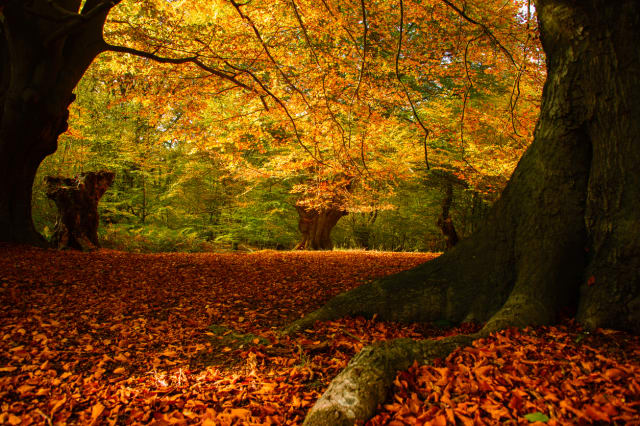 Some of Epping Forest's oldest trees are in danger of being wiped out after a killer disease infected local shrubs.

A report by the Standard says that phytophthora ramorum, sometimes known as sudden oak death, has been found in rhododendron and larch trees at the Warren Plantation in the north of the forest, between Waltham Abbey and Epping.

See also: Ever seen a 'goat tree'? You have now

According to Wikipedia, symptoms of the disease include bleeding cankers on the tree's trunk and dieback of the foliage, in many cases eventually leading to the death of the tree.

The Forestry Commission explains: "The generic name for the disease it causes is Ramorum disease. The disease is known in the USA as 'sudden oak death' because different strains of the pathogen cause disease and mortality among North American native oak and tanoak species.

"However, the strains of P. ramorum found in Britain have had little effect on British native oak species. It is sometimes referred to in Britain as 'Larch tree disease' and 'Japanese larch disease' because larch trees are particularly susceptible, and large numbers have been affected.

"The first UK finding was made on viburnum in February 2002 at a garden centre in Sussex. The first record of P. ramorum on a mature tree in the UK was on a 100-year-old southern red oak in November 2003."

Speaking to the Standard, Dr Jeremy Dagley, head of conservation at Epping Forest, said the discovery was unexpected as the nearest known locality of the disease was at least 50km away and the main outbreak has been in the western third of the UK.

He added: "This disease is spread by several host shrubs and trees with the best known and most widespread being rhododendron.

"The most prolific infective host species is larch. Both of these species are present within Epping Forest."

Dr Dagley has suggested a complete clearance of larch and rhododendron from the forest in a bid to stop the disease from spreading and to save the forests' beeches, some of which are at least 1,000 years old.

For out-of-this-world views of Finland's snow-covered forests, Eagles View is a spectacular suite with floor-to-ceiling windows and a glass roof surrounded by the Syote National Park. Its name comes from the sightings of eagles soaring against the snow-filled sky and the room offers couples evenings in front of a crackling fire and a front-row seat when the Northern Lights make an appearance.

Based on simplicity and accessibility, this traditional wooden structure gives a sense of height and lightness, while reflecting minimalist Swedish design. The exterior of The Blue Cone consists of laminated birch wood, while the interior of timber. The quirky room is accessed by a bridge from a nearby mountain and once you get inside and check out the breathtaking views from the beautiful room, you'll see that it was worth checking in to this understated treehouse room.

Perfectly located next to the Bandhavgarh National Park for a tiger safari, the five tree-top rooms at Tree House Hideaway in India feature air-conditioning, an en-suite bathroom, a living area, minibar, mosquito net and even a writing table - because there's plenty to inspire you during your stay! The private balconies overlook the tiger reserve and the Bandhavgarh Fort, and animals are frequently spotted so you won't want to forget your camera.

A cabin in the woods might not sound like the most appealing place to spend the night but this cool and quirky tree room makes for a cosy and unique stay. The Cabin at Treehotel was based on the idea of creating a platform high up on a sharp hillside overlooking the Lule River valley. The room is reached by a bridge among the trees and resembles a capsule as a foreign body among the trees.

It's not technically a room but we had to tell you about Soneva Kiri's Treepod Dining, which takes haute cuisine to new heights! The treetop restaurant at the Thai hotel on the island of Koh Kood offers a bird's eye view of the ancient rainforest and stunning coastline. Take a seat in the bamboo pod at ground level and be hoisted six metres up into the tropical rainforest before sampling jungle-themed offerings from the menu, such as Canapés in the Canopy and Forager’s Basket.

Ever wanted to climb aboard an alien spaceship? The UFO at Sweden's Treehotel offers guests the opportunity to live out their childhood dreams and spend the night in a flying saucer. The room was built for four people and is cast in durable composite material, creating a light and strong place to sleep in the trees. Inside, there are separate bedrooms, a bathroom and a living area, plus space-themed furniture.

Looking for a five-star treehouse holiday? The Tree House by Lavender Hill Cottages resembles a fairytale castle and comes complete with its own outdoor hot tub. The house sleeps five and the master bedroom is entered by climbing a magical, spiral staircase where the starlit Somerset skies can be glimpsed through skylights and the quirky triangular windows. There's under-floor heating, a wood burning stove, a roll-top bath and a bunk room to capture the imagination of children.

This exciting hideout among the trees in Sweden is camouflaged by its mirrored exterior reflecting the surroundings. And you don't have to worry about the super-cool room confusing birds as the walls have an infrared film that is visible to birds but not humans. Inside The Mirrorcube, you'll find windows offering panoramic views, a double bed for two people, a bathroom and a lounge. There's a rooftop terrace too, just in case sleeping in a mirrored cube isn't amazing enough for you!

Treehouses aren't just for sleeping and at The BodyHoliday in St Lucia you can keep fit and healthy in one. The unusual Tree House is a new spinning and fitness studio set among the trees with its own Zen Deck for sunset yoga in the forest too. The glass-enclosed structure towers 25 feet above ground and is surrounded by tropical gardens with magnificent views of the Caribbean Sea. Plus it means you don't have to worry about prying eyes outside!

Nests aren't limited to birds as the Treehotel in Sweden has built The Bird's Nest fit for humans - and it's super-spacious and stylish. The room is big enough for a family of four with a gigantic bird's nest exterior providing a camouflage so you become part of the forest surroundings. Inside, the walls are clad with wood panels and the windows almost disappear in the outside branches.

Bangkok Tree House's View with a Room is a stunning, minimalist room where the sky and stars are the ceiling and the trees and forest are the walls. Perched seven metres in the air, the 'room' is a bamboo platform with a flower strewn futon under a fine canopy, allowing uninterrupted views of the sky and horizon across the tops of the surrounding trees. A night under the stars doesn't get much better than this!