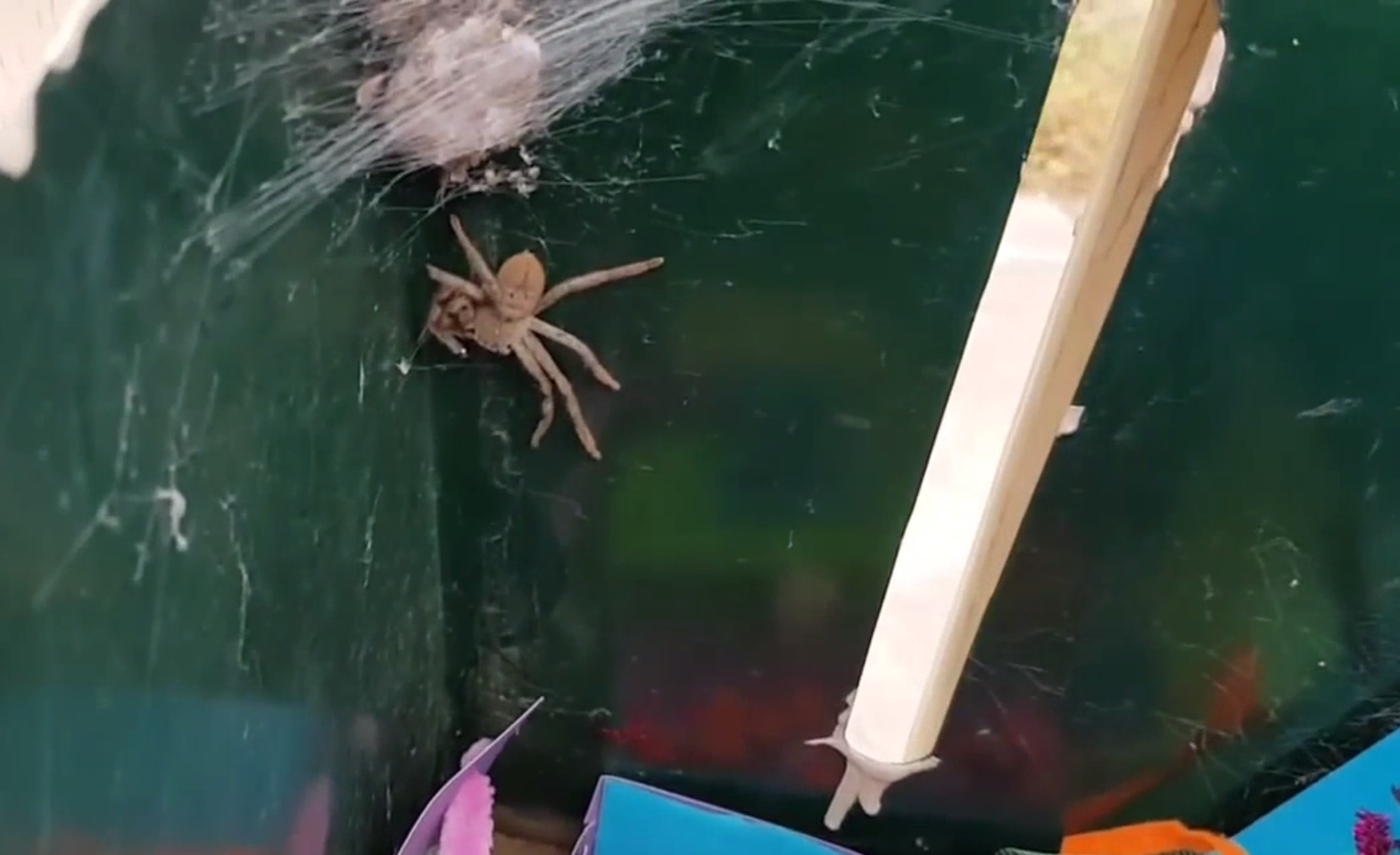 Australia proved once again it is the undisputed king of spiders after a huntsman, endearingly named Hortense, and her 100 or so children moved into a mailbox in a Victoria home.

The video, which was taken on 21 November, was captured by North Bendigo woman Natasha Joyce.

It shows her opening her mailbox and finding a Holconia huntsman, which The Bendigo Advertiser reported as having lived there for six weeks.

Over that time, the mother stood by the egg sac as hundreds of spiders began to hatch.

The video shows Hortense and her swarm of children hanging around the egg sac; in the other corner of the mailbox, what appears to be a bull ant or wasp falls into the web and gets caught.

World's deadliest insects
Native to east and southeast Asia, the Asian giant hornet is the world's largest hornet with its two-inch-long body and three-inch wingspan. Especially well known in Japan, the hornet packs a lot of venom and can attack and kill people. Hundreds of people were stung by the flying insects in the Chinese province of Shaanxi in October 2013. The hornets killed 28 people with their highly toxic sting that can lead to anaphylactic shock and renal failure.
Tsetse flies may resemble house flies but these insects, found mostly in Africa, are blood suckers that carry dangerous parasites, causing sleeping sickness or trypanosomiasis. The disease develops slowly but can be fatal if treatment is delayed. Tourists on safari holidays in destinations, such as Tanzania and South Africa, as well as in the Sahara have been bitten by tsetse flies.
There's nothing scary about ants, right? Wrong! Fire ants attack humans with both a bite and sting, leaving your skin swollen, red and painful. While their sting is more bearable than a bee sting, fire ants have been known to kill people, especially those who are allergic. Native to South America and found in hot countries, the insects can cause victims who are allergic to their bite to sweat, have slurred speech and chest pain.
Known for carrying Chagas disease, Assassin bugs most often infect people in poor, rural areas of the Americas. They are known as 'kissing bugs' as they usually bite their victims around the mouth and nose while they are sleeping - some bites are painless and others are the most painful of any insect. The danger comes after the bite, with Chagas disease causing rashes, fevers and vomiting, and in some cases death.

You probably didn't think you'd find the common dust mite in our roundup of dangerous insects but when it comes to Britain's deadliest bugs, these tiny invertebrates that can only be seen under a microscope are the biggest killers. 90 per cent of asthma sufferers in the UK identify dust times as a trigger for their attacks and charity Asthma UK says there were 1,143 deaths from asthma in the Britain in 2010. While not all of these deaths were caused by dust mites, droppings left by the insects can trigger asthma attacks.

Malaria has killed millions of people worldwide and is most commonly transmitted by a bite from an infected female Anopheles mosquito. Once the female bites an infected human, she transmits the malarial parasites to the next person she feeds on. Dengue is another killer disease spread by mosquitoes, with experts warning travellers to Brazil for the 2014 World Cup of the risks when visiting the South American country.
They may be tiny but ticks can be deadly too. They feed on the blood of mammals and spread diseases between their hosts. The most serious for humans is Lyme disease, which if left untreated can cause permanent disability. In 2008, a British woman plunged to her death from her bedroom window after suffering from Lyme disease when she was bitten by a tick while staying at her friend's property in France. The tick bite caused Jan Lynton to suffer paranoid delusions.
The fact that Bull ants are found in Australia (where some of the world's deadliest and most venomous animals live) tells us their sting probably packs a serious punch. Also known as Jack Jumpers, they are one of the oldest ant species, grow over 40mm-long and are extremely aggressive towards intruders. They can spot you from a metre away and their highly painful sting can cause anaphylactic shock if you're allergic.
It may look cute and furry to some but the puss caterpillar is far from. The fuzzy creature, found in North America, will spit acid at any attacker and has poisonous pines all over its body, which can cause extreme reactions for humans. Although no deaths have been recorded as of yet, its sting is hard to identify leading to patients being misdiagnosed and sometimes accidental deaths.
Africanized honey bees, or Killer bees, viciously attack people who unintentionally enter their territory. They are extremely sensitive to vibrations and when disturbed they have extra soldiers on duty to respond to alarms. The bees are similar to regular honey bees but have a defensive attack, so when a colony senses a threat a victim can be stung around 2,000 times, compared to up to 200 times by honey bees. In June 2013, a farmer was tragically killed in Texas, USA when he was driving a tractor on his neighbour's property and hit a pile of wood that concealed a hive of 40,000 Africanized bees.
Up Next