Baby orangutan rescued after six months chained by the neck 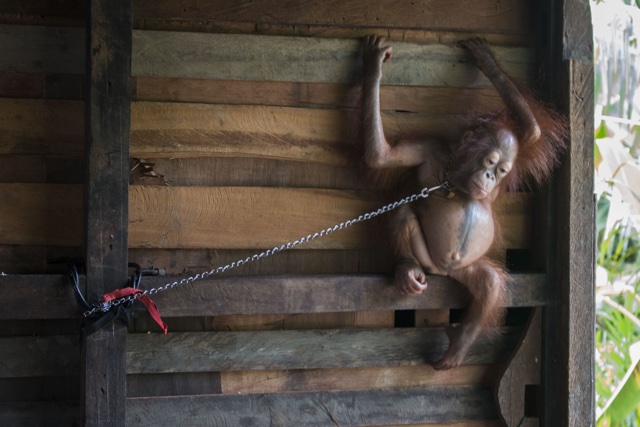 A baby orangutan has been rescued after spending six months chained up on a narrow plank of wood in a house in Borneo.

The International Animal Rescue team learned from the Palung Foundation that a baby orangutan being kept as a pet in the district of Sandai.

See also: This baby orangutan was left to die in a cardboard box

Randau Jekak, the village where the orangutan was being kept, was about 200km away from the orangutan rescue team and took five hours to reach by road. When they arrived the rescue team found the little female named Bonika chained to the wall in the kitchen. 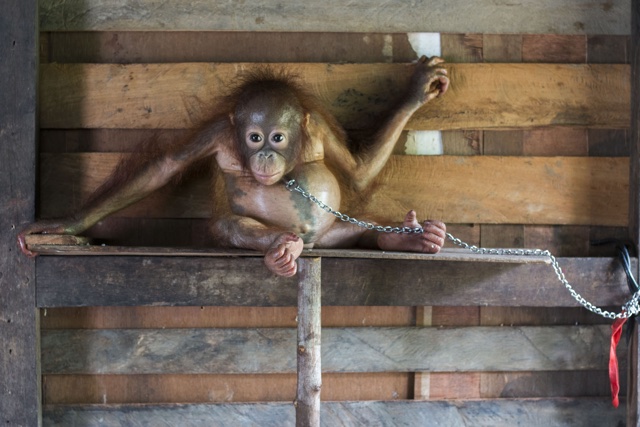 A spokesman said: "She was chained so tightly around the neck that she was clearly in considerable discomfort. The length of the chain was also very short so that poor Bonika could barely move from side to side and was stranded on the plank of wood.

"The medical team carried out a dental check and concluded that she is about eighteen months old. According to Bapak Hendrigus, the man who captured Bonika, he had been keeping her as a family pet since June when he claimed to have found her in the middle of a palm oil plantation. He was on his way to work at a rubber tree plantation when he said he spotted the little orangutan all alone and looking very thin. So he caught her and brought her home to live with his family." 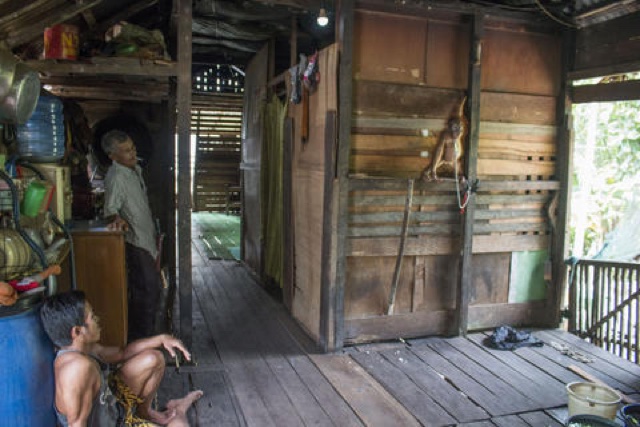 Bonika was fed on rice, sugar cane, biscuits, bread, mineral water and baby milk. She was set free for a while every morning and evening to play with his daughter and she was bathed using human shampoo. When she wasn't playing with his daughter, Bonika was chained up on the plank in the kitchen to stop her escaping from the house.

However, eventually Mr Hendrigus realised that it was illegal to keep a wild orangutan as a pet. He was willing to hand the orangutan over to the BKSDA but he didn't know where and how to go about it. Fortunately, when our Human-Orangutan Conflict Team (HOC) was visiting Sandai district, they heard about Bonika and passed the information on to the rescue team. 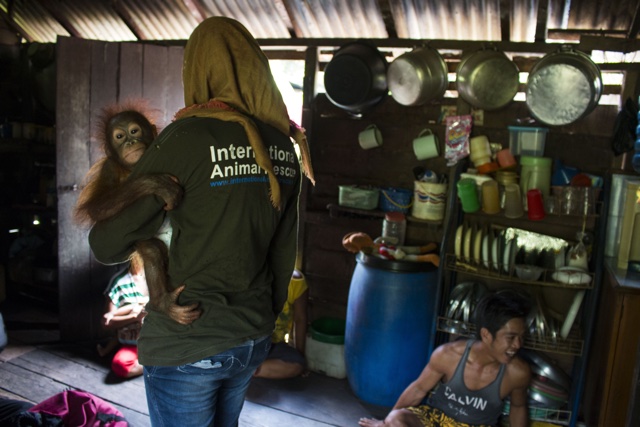 Alan Knight OBE, Chief Executive of International Animal Rescue, said: "What a miserable life for a wild baby orangutan. To be chained up alone on a narrow plank of wood without the company and comfort of her mother. However it is heartening that Pak Hendrigus knew it was wrong to keep her as a pet and at least now she has a chance of living the life that nature intended.

"We are all delighted to have been able to rescue Bonika but also deeply saddened by the likely fate of her mother. No mother orangutan parts willingly with her baby and Bonika's mother was almost certainly killed.

"In July the Bornean Orangutan was reclassified by the International Union for the Conservation of Nature (IUCN) as Critically Endangered. Every precious individual counts: every animal we save is a triumph and every animal that dies is a tragedy. Babies like Bonika are our hope for the future – but it needs the will of all those involved in the orangutans' decline to commit to preserving sufficient habitat for these magnificent great apes to survive and to thrive."

An International Animal Rescue spokesman added: "Please consider making a donation today, so we can continue looking after Bonika and all the other orangutans in our care. Your donation will also help our Human-Orangutan Conflict team continue their fantastic work - there could be many other orangutans just like Bonika; chained up, malnourished and desperately waiting for their rescue day."