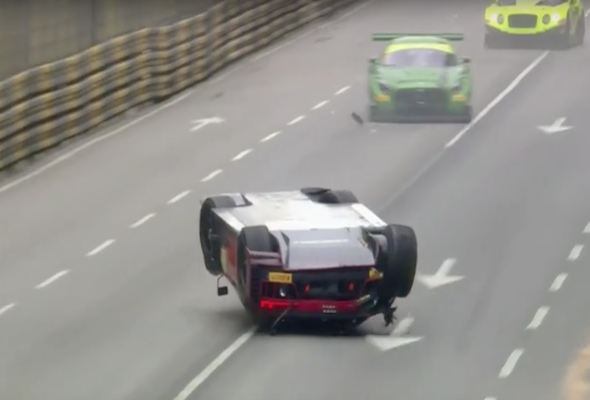 An FIA GT World Cup racer was lucky to walk away from a nasty crash at the weekend – and still managed to win the race.

Laurens Vanthoor had just lost the lead at the Macau Grand Prix yesterday, when he took a turn too quickly and lost traction at his rear wheels, causing the car to spin.
The unforgiving circuit has barriers right at the track edge, and Vanthoor's Audi R8 hit the wall at high speed.

The impact launched the car into the air, causing it to flip back on to its roof. It then slid along the tarmac at high speed as sparks flew and other racers dodged the wreckage.

Vanthoor clambered free of the car to relieved cheers from the crowd.

Incredibly, he took top spot on the podium. The crash caused the race to be abandoned, meaning the final positions were taken from the last completed lap when Vanthoor was in first place.