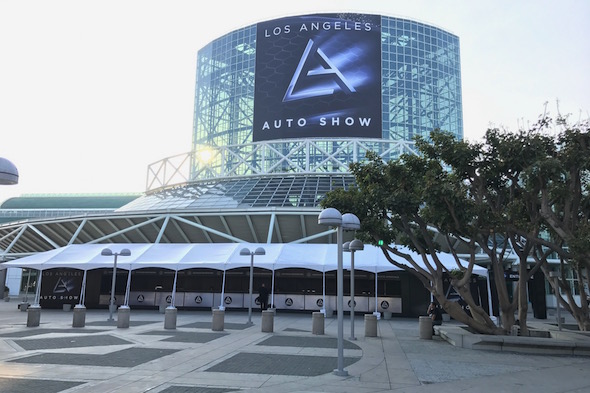 For a land known for its love of excess, the LA motor show is a relatively bijous affair. Small, compact and easy to get around, it's the polar opposite of the city that hosts it.

It makes little sense launching cars in a metropolis that's smothered in a layer of smog, rammed with traffic and needs more cars like the ozone layer needs a bigger hole in it, but America, being America – it does it anyway.
Unlike the vast, monolithic motoring expos of Frankfurt and Paris, LA does things in bite-sized chunks (unlike its burgers). The stands are more compact, the press corps less stressed and fewer in numbers and the new car launches less frequent.

But that doesn't mean there isn't big news out here in the States – some manufacturers, especially those with a presence on this side of the pond, or with aspirations to have one, take the event pretty seriously indeed.

Alfa Romeo is one such ambitious car maker. The Italian firm showcased its new Stelvio SUV with a launch in a tent outside the main halls. It was so packed, the over zealous American fire regulations meant most journalists couldn't even get in. Fortunately, the Porsche Macan and Jaguar F-Pace rival was quickly moved to the Alfa stand where we got a proper look.

Rumours suggest it will arrive in the UK late in 2017 with a diesel engine first before a bi-turbo 2.9-litre V6 packing 503bhp follows soon after. The spicy version will have four-wheel drive, the diesel making do with power via the rear wheels. Some Italian flair in a sector not known for it will be most welcome.

Elsewhere, the Germans gave the clearest signs yet that another recession was imminent with the unveiling of the why-do-we-need-it Mercedes-Maybach S650 Cabriolet. Just 300 of the 621bhp monsters will be produced and, although pricing is yet to be released, don't expect much change from £200k.

Los Angeles Auto Show
Up Next


Mazda used the eve of the first press day to take the wraps off its new CX-5. At an event peppered with nonsense car design gobbledygook and interspersed with pictures of cheetahs and chopsticks that were being used to demonstrate Mazda's new design direction, the manufacturer showed off a rather smart looking SUV.

It's the best selling model in Europe for the firm and its new nose, which has more than a hint of Jaguar F-Pace about it, points to the future look for all Mazdas. It also comes in a new red, that's more red than the last red. Understood? Good.

Jaguar was another manufacturer that had decided to grab some early motoring show headlines, revealing its futuristic electric I-Pace to the world in its own unique style two full days before the event opened. Using virtual reality headsets it simultaneously launched the car in LA and London, with car designer Ian Callum showing off the firm's first foray into EVs.

LA was an apt showcase for a model that'll sell 50 per cent of its volume in the States and with a range of 310 miles on a single charge, chances are those buyers will be queuing up to get hold of one when it goes into production next year. Finally a Tesla rival from Britain? We hope so.

Other notable launches included a world premiere for the largest of all Minis, the Countryman, and the new Volkswagen e-Golf with a range of 186 miles on a charge - up 50 per cent on its predecessor.

However, it was the real Americana that caught our eye in the subterranean halls under the main event. Dubbed 'the garage', they contained a host of modified motors that were a welcome relief from the corporate frontage of the manufacturer stands upstairs.

Modified Ferraris, Gulf-livered Fords and big-wheeled classics were among the delights hidden away below the show's huge halls. Just like the city then, proving if you scratch beneath the surface a little you'll find the real treats.
Tags
Read Full Story Click here to comment

H&M to close hundreds of stores as online shift accelerates