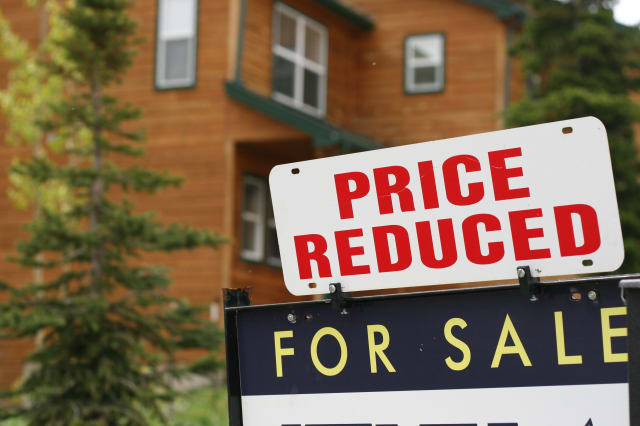 Greedy estate agents are making the process of selling your home longer, more difficult and far more stressful than it needs to be. They are also costing homeowners thousands of pounds. A report by the Nottingham Building Society found that overpricing is a major problem across the country, causing headaches for thousands of sellers.
What people think of estate agents - and other professions?
Its survey revealed that 41% of people who have sold a house in the past five years, said the price they finally sold for was lower than their original target. It also showed that around one in 12 had to settle for a considerably lower price than they had originally hoped for.
Is this the UK's cheapest property for sale?
In some parts of the country the problem was particularly bad. In Yorkshire and Humberside, 57% of people had to drop the price to sell, while in the South West and the North West 55% of people did, in the North East 50% of people did, and the South East 44% of people did.

The Nottingham says it highlights the importance of realistic valuations from the start, along with the kind of support needed to help people make the right decision as to how to price their home. Su Snaith, Head of Estate Agency at The Nottingham, said: "Price is not all that matters when you are selling your house but it can be absolutely vital if you are relying on a certain price for your next purchase, which means realistic valuations are essential."

She says that: "The research emphasises the need for independent advice focusing on what is important for sellers at the start of the process and particularly so when so many are taking substantial price cuts." If they want to sell reliably and quickly, then they may want to price it for a quick sale. If they want to make as much money as possible, they may be willing to prepare the property - possibly with a small investment - and get a much higher price.

Why asking prices are cut - and why it's a bad thing

The issue lies in estate agents who don't care what you want, and aren't focused on a realistic sale price. They just want to inflate the price to win the business. They know that if your home doesn't end up selling at the inflated price, you have signed a contract, and you're stuck with them, so they can suggest you reduce the price to match more realistic valuations from other agents and you cannot move.

By now, of course, buyers will have seen your home sitting around with no interest, so they will assume there is something undesirable about the property. The risk is that you have less interest than if you started with a realistic asking price, and it may even fail to sell with a sensible price tag.

If you cut the price again, buyers see a home with a series of incremental price cuts, and get the impression that the house is failing to sell at any price. Instead of tempting the bargain hunters, you run the risk of making your property toxic. Sam Ashdown, author of The Home Truths, points out that nobody is keen to snap anything up when the price is falling, because they can hang on and get it even cheaper.

If your home is hanging around on the market, then there are five things you need to do to get the estate agent to start making money for you rather than risk losing you a sale.

1. Get other agents to price up the property. That way you will have an idea of how realistic your asking price is. Also ask them for feedback on anything you can do to make the property more saleable. Only if they all say the property is very overpriced should you make a change.

2. 'Stage' your property. At this stage you don't want to be decorating, but you need to sort anything that's incredibly off-putting. This includes tidying up, removing large or dominant pieces of furniture, and possibly painting anything very tired or unfashionable. You should also think in investing in some fashionable and luxurious accessories that you can take with you, which will improve how the property looks dramatically.

3. Get your agent to send in a better photographer. You may need to be pushy on this one, and if push comes to shove, you may need to employ a professional yourself, but they will come armed with good lighting, and the tricks of the trade that will make your property look 100 times better than the original photos.

4. Push your estate agent on the marketing. Look through the details they have sent you, Are they selling your home, or just filling in the bare minimum? Where are they advertising? Have they featured your home in any of their marketing drives? They will make a decent sum out of selling your property, so they need to work for the money.

5. Get them to show you round the property. Are they doing enough to sell it? Are they showing rooms off to their best advantage, and pointing out the benefits? Are there things you can tell them about how you live in the property that may help - is the patio a lovely place for an evening glass of wine, is there somewhere that the Christmas tree looks stunning, or are the neighbours particularly lovely?

Once you start to push for a better service, it's safe to say you won't be the agent's best friend, but if they know the only way to get you off their backs is to put some effort in and sell the property, you may be surprised how many buyers they can get through the door.

That way they'll start making money for you instead of costing you dear.

In Scotland, Edinburgh is seen as a city with huge growth potential. In 2014, prices in Edinburgh were up 10% in a post referendum boom that shows little sign of slowing down.

Local agents are not expecting quite such stellar growth for the next 12 months, but they think price rises will be well above the average predicted for the whole country.

Rightmove named this as the area where it expects house prices to grow the most over the next five years. It says that over this period there will be a huge number of people moving out of London in order to afford to get onto the property ladder. They want a reasonable commute combined with plenty of attractions in the local area, and Southampton offers all this. With relatively affordable housing stock, it's a prime candidate for growth.

Luton was Rightmove's candidate for the second biggest house price rises over the next five years. It emphasised that this isn't a mater of opinion, it is the result of crunching the data.

Luton is another major beneficiary of the move out of London, and while it is arguably not as attractive a place to live as Southampton, it's only 23 minutes into central London - which rivals some of inner London's commuter times. With average prices of £179,368, it's clearly a far more affordable option, and the area has already started to show signs of a boom.

This was the third area suggested by Rightmove. As with Southampton, it is well positioned for London commuters, and also has huge local attractions.

A survey last year asked young professionals to name the place they would most like to live, and Brighton and Hove were the only areas that appeared on the list outside London.

One of the reasons it's not higher up the list is that houses are already on the pricey side, with an average cost of £338,956 - up 13% in the past year alone.

There may be few people who grow up with the dream of living in Swindon, but the electrification of the rail line to London will bring travel times down across the West Country, so Swindon becomes part of the outer commuter area.

Given that the average property costs £168, 968, it's easy to see why Swindon will be a popular option for commuters on a tight budget.

Bath is also going to benefit from electrification of the line, because the commute to London will fall to a manageable 70 minutes. The beauty of the city - along with a vibrant social and cultural life - makes it a clear choice for more long-distance commuters.

Of course, with an average asking price of £374,617, it's not a tremendously cheap place to buy, but the geography of the city restricts development, so these prices are expected to rise still further.

Property Frontiers says that the booming house prices in Oxford are set to get even higher. At the moment, travel to London takes 60 minutes, but this will reduce even further in 2016 when the line is electrified. Prices in the most desirable parts of the centre aren't much cheaper than London.

However, further out there are pockets of affordability, and when the Water Eaton station opens in 2015 it will open up areas to the north of the city too.

Manchester has seen enormous property price rises over the last couple of years, and Property Frontiers expects this to continue into 2015.

Other commentators are expecting the growth to slow over the next few years, especially given the gains made since 2012. However, demand for properties remains buoyant, and with the growth of the local economy, price rises seem inevitable.

Rising prices in London have pushed buyers further and further out of the centre, so estate agents are now claiming zone three as 'the new zone 2'.

Savills believes that the biggest gains over the next five years will be the less glamorous districts - putting the South and East in the frame. Gritty areas that could benefit include Ladywell, Streatham and Catford in the south, and Leytonstone, Forest Gate and Walthamstow in the east.

Cambridge could also perform well. It has already had house prices lifted by the growth of tech companies to the north of the city, and the arrival of pharmaceutical headquarters will help push prices up further.

In 2016 a new rail service from the city to the science park will keep prices rising, and beyond the opportunities presented by the local economy, Cambridge is also part of the 'outer commute' area of London, which Savills expects to shoot up in value over the next five years.