Who should get the armrest in the middle seat on a plane? 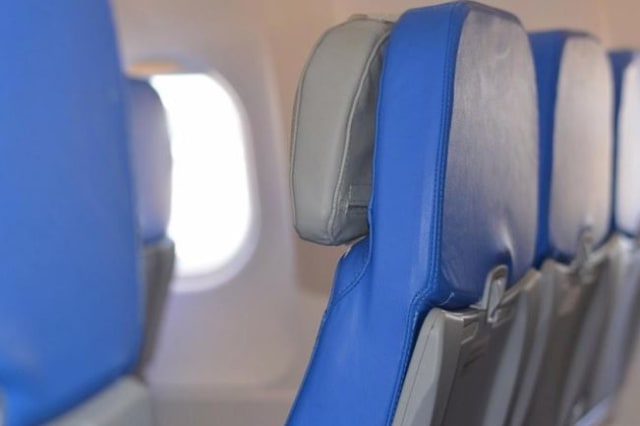 Air travel used to be the height of glamour.

Even if you were seated in economy class, the experience was special. (And smoky, but we don't miss that).

In those days, they also didn't have the dreaded middle seat.

See also: Does this evidence solve the disappearance of Amelia Earhart?

But today's aircrafts are designed to fit in as many people as possible in order to maximise profit margins, meaning seats in coach are in rows of three.

Which means that someone has to sit in the spot in the middle. Not surprisingly, it's seen as the worst seat: You don't have a window, you don't have the aisle, you are trapped between two strangers 40,000 feet about the earth. And worse, you don't know which armrest is yours.

Flight attendants often get caught in the middle of arguments about this, but many have theories on how to solve the problem.

One flight attendant Debbie Ferm says:" "I think the person on each side has an entire armrest to themselves, so they are obligated to follow the lead of the person in the middle seat."

Others think you should share the armrest, one person uses the front, and the other uses the back. But what if your arms touch?

Perhaps the answer is to just use common sense. If someone needs the armrest, let them use it. Or maybe airlines should just start assigning the armrests like they do the seats. Another way for Ryanair to charge passengers, perhaps?

The best things about flying

Can't resist taking advantage of the duty-free shopping on a flight? Neither can we! From perfume to alcoholic drinks and kids’ toys to chocolate, planes are the perfect places to stock up on a selection of treats. User Carrie Joanne McGrath recalls the "special memories" of buying her daughter a little treat on the plane. Ann Kelly says she likes to buy perfume: "I love having some retail therapy in the sky instead of on the ground."

Who doesn't enjoy being waited on? Having endless drinks served to you, a blanket if you get cold and all those smiles - we take our hats off to flight attendants for being so cheerful throughout a flight. Friendly cabin crew makes user Cathy Creighton's journey too. She says: "I love a nice smile from the stewards and staff and then I smile back and relax."

Don't you just love the excitement of take-off? That feeling in your stomach as the plane starts to move before you're lifted from the ground. User Judith Lightfoot knows just what we mean and says: "I love the thrill of the take-off - all that power and acceleration, the start of another adventure!" Michaela Jay Williams adds: "When the plane takes off it is the start of a holiday for me. Sit back, relax and watch films, snack until we get there."

Sitting back, relaxing and not having to worry about the stresses of home - being on a plane is perfect for switching off and just enjoying the journey with the simple things in life - a good book, food and a few movies. User John Fairbrother says he loves "the moment the 'Fasten seatbelt' light goes off after take-off and you can breathe a sigh of relief, before cracking out your favourite book and bag of M&Ms and relax for a few hours." Jane Dale-Beaumont adds that she loves everything about the relaxation, being "waited on, sleeping, TV or reading - it's all good!"

Forget rooftop bars and beaches. The sunset views from a plane can't be beaten and there's nothing we love more than seeing the red and orange hues above a blanket of white clouds - magical! Facebook user Natasha Madden agrees with us and says "flying to Gran Canaria when I was younger, we went over a mountain range but it was sunset and just beautiful." Sunrise is another magnificent time to look outside while on the plane. Elisa McCombe told us it's "absolutely gorgeous seeing it whilst in the sky!"

These days, travellers can get excited about airline cuisine as dry and tasteless plane food is a thing of the past. Whether you've booked a seat in Economy or First Class, there are delicious hot and cold dishes served on board - and we mean Michelin-starred-style dining. Top chefs Heston Blumenthal, Michel Roth and Vineet Bhatia have all been involved in creating delectable plane food for flyers. User Beth Crunden says she's a fan of inflight meals. "I love that it's in a small hot dish but seems to fill you up."

If you've ever enjoyed the luxury of flying Business or First class, you'll never want anything less. The extra room, being waited on throughout the flight, stretching your legs while you sleep - it's undeniably the best way to travel. Our Facebook user Ellie Lane says: "What's not to like about Business Class - no queues at check-in, fast track through security, lounge, lovely in-flight meals served on proper tableware, being able to eat when you feel hungry and best of all being able to sleep!"

It's one thing seeing a comet from the ground but some passengers are lucky enough to watch bright comets lighting up the sky from a plane. User Janet Govey told us she "saw Comet Hale–Bopp in the night sky on a return flight from Cyprus as we crossed the English Channel". Other natural phenomena to look out for on a flight include lightning and rainbows.

We know some airlines are introducing WiFi to flights but is it really so bad going tech-free while you're in the sky? Many people appreciate the quiet environment and the freedom of being out of touch. User Lorraine Fiander tells us "having to switch off" is the best thing. She uses her time on a flight to "read, sleep, eat and watch a film - it's the first part of my holiday".

By the time you've enjoyed the thrill of take-off, watched a couple of films and had a good rest, it's time for the arrival at your destination. Whether you're visiting a cosmopolitan city like New York or the idyllic Maldives, there's nothing better than stepping off of a plane to be greeted by the scents and sounds of somewhere new. User Janet Govey says the moment she "steps out and inhales the characteristic smell of a different land" is the best. Maria Gilbert adds: "I love that moment when you walk out of an air-conditioned airport in a foreign country and get smacked in the face by an un-British climate."

If you're a sucker for an aerial view like us, you'll opt for a window seat every time and be found staring out at the unknown landscapes throughout a flight. Facebook user Natasha Madden says looking out of the window is her favourite thing about flying and "the world is so pretty from up there, plus... you're FLYING!" Sabine Bassler says she loves "seeing the world from above."