Driver banned after sticking fingers up at speed camera 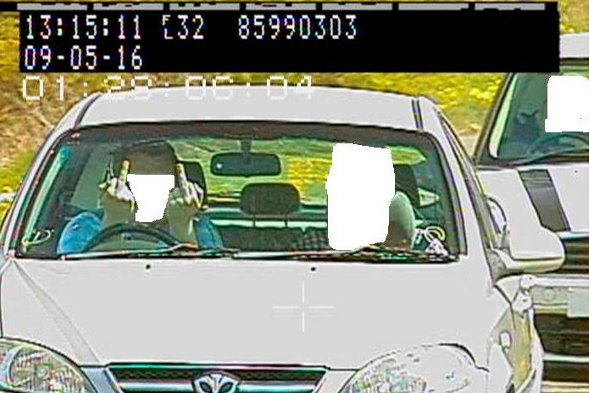 A man who was caught sticking his two middle fingers up at a speed camera has been fined and banned from driving.

Marc Swanston, 23, was caught driving at 70mph in a 60pmh zone earlier this year, and was found to have no insurance. He's now been fined £300 and given a six-month driving ban.

"The A811 has a long history of such collisions and this driver's disregard for the limit could have resulted in tragic consequences. The additional offence of no insurance simply makes matters worse."

And Safety Camera Scotland has shared the speeding camera's image of Swanston, tweeting: "Think speeding & 'waving' @ the camera (A811 Stirling) - when you've no insurance - is cool? Ends in £300 fine, Disq for 6 months. Cool Now?"

It's by no means the first time that speeding motorists have been caught making rude gestures at the speed camera. In 2011, a cocky motorcyclist thought he'd got away with it as his bike lacked a front numberplate - but was caught when police recognised his face.

And, earlier this year, company boss Waqas Choudhry was caught flicking two fingers at a speed camera after he escaping fines for speeding offences up and down the country by using an untraceable foreign numberplate.

There's very little you can do if you're caught speeding - the camera very rarely lies. You can't really claim that someone else was driving, or that they've got the wrong car.

Your only real chance is to argue that the camera is at fault and that you were within the limit, or else that there wasn't proper notice of the limit. However, this is generally very difficult to do.

7 PHOTOS
Cars most likely to be caught speeding
See Gallery

Cars most likely to be caught speeding