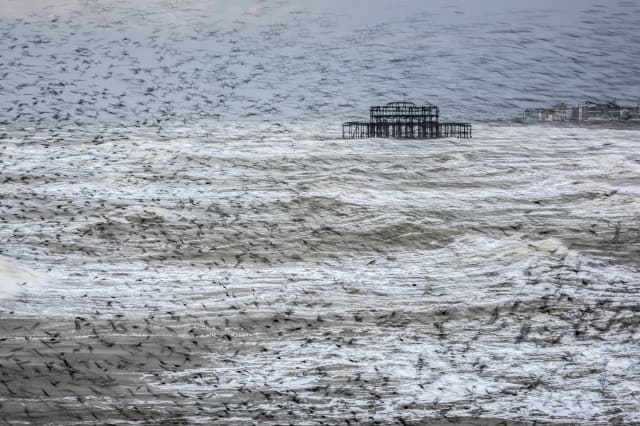 An "intriguing" image of starlings swirling around the remains of Brighton's West Pier has scooped the top prize in the Landscape Photographer of the Year awards.

The dramatic shot by Matthew Cattell, from Bracknell, Berkshire, which judges likened to the tornado in the Wizard of Oz, beat thousands of entries showcasing the UK landscape to win the overall title and £10,000.

An atmospheric black and white photograph of a walker on a ridge above a spreading tree in the Peak District and an image of the delicate tracery of a sandbank against calm water were among the category winners in the competition.

A view of a windswept cottage in the Scottish Highlands, a dramatic shot of urban tower blocks being demolished, and a railway viaduct forming the backdrop to a rocky landscape in the Yorkshire Dales also won categories.

Charlie Waite, landscape photographer and founder of the Take A View Landscape Photographer of the Year awards, said of the overall winner: "The sense of movement is palpable in Matthew's photograph and you really feel what it would have been like to stand beside him.

"The starlings seem to be swirling around the iconic remains of Brighton's West Pier in a manner reminiscent of the tornado in the Wizard of Oz.

"A judicious choice of shutter speed suits both birds and water. An intriguing image."

The awards were held in association with VisitBritain for the third year, with a category for images which showcased the diversity of moments and experiences that can only be had on a trip across Britain.

The category was won by Mark Gilligan, from near Northwich, Cheshire, for a perfectly framed shot of a figure standing by Wast Water in the Lake District, under the arch of a rainbow.

VisitBritain's director of marketing Robin Johnson said of the picture: "It is a fantastic example of the powerful role that imagery plays in inspiring people to travel and experience new destinations, allowing them to literally 'put themselves in the picture'."

Hannah Faith Jackson, aged 15, from Strathaven, South Lanarkshire, won the Young Landscape Photographer of the Year in the competition for her shot of the reflections in a Glasgow bar window.

Landscape Photographer of the Year 2016
Up Next