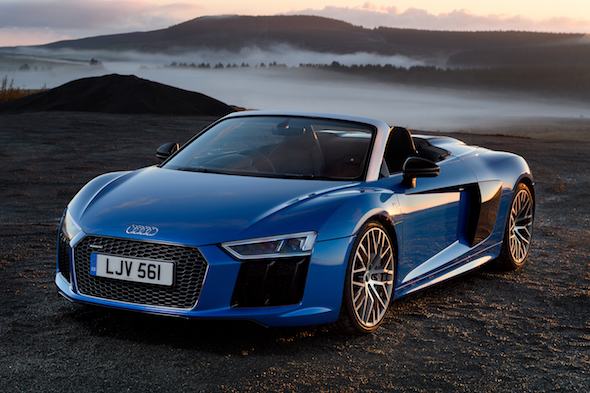 The second-generation Audi R8 has been with us in coupe form for about a year now, so it's time for the convertible version to see the light of day.

We were given early access to the car on British roads to give you a verdict on how it measures up to the high standards set by its predecessor.
What is it?

Audi has Spyder-fied the latest iteration of its iconic supercar, the R8. The coupe version is one of our favourite performance cars, offering stunning styling, a stonking engine and everyday practicality.

In convertible form it's much of the same, but now there's a cloth roof that folds into the rear of the car in about 20 seconds. The rear deck lifts up as arms twist and turn to accommodate the roof, which is fascinating to watch.

It's 25kg lighter but 50 per cent more rigid than the old R8 Spyder, thanks to the new aluminium-intensive chassis, which only weighs 8kg more than it does in the coupe.

The Spyder gets the same 5.2-litre V10 petrol engine that features in the coupe. However, it's not available in full-fat Plus guise here, so it only gets 532bhp and 540Nm of torque.

It's an utterly sublime powerplant, helped by the fact it's one of the few remaining performance engines to shun forced injection in favour of naturally aspirated goodness. Turbos are good for providing in-gear shove – and meeting economy targets – but the way this thing wails as it spins ferociously up to about 8000rpm will make you sad that these engines are going the way of the dodo. As last hurrahs go, it's pretty special.

It's hard to talk about something that costs a six-figure sum being value for money, but when you look at the build quality, performance and desirability compared with its rivals, it does seem like something of a steal.

With a starting price of £129,990 it's less expensive than a Porsche 911 Turbo Cabriolet and much more exciting to look at, too. It's considerably more expensive than a Jaguar F-Type SVR but feels better put together.


Fitted as standard are 19-inch alloy wheels, Audi Virtual Cockpit, LED front and rear lights and Nappa leather interior upholstery. Naturally, with exotic cars such as this, there are countless expensive options to choose from. 'Our' R8 Spyder came with about £30,000-worth of extras, including £4,900 for the gloss carbon exterior styling pack, £3,150 for laser headlights and £2,350 for 20-inch alloys.

Its key rival is that Porsche 911 Turbo Cabriolet, which at £135,766 is about £6,000 more expensive than the Audi. When you consider that the vast majority of people probably couldn't tell much difference between the Turbo and a Carrera Cabriolet that costs nearly half as much, it's easy to argue the R8 Spyder is an altogether more special prospect.

Out on the road, the R8 Spyder is something of a battering ram, offering searing performance whenever you stamp the throttle.

Even with the gearbox in full auto mode, there's only a moment's hesitation as the S tronic system dives down the cogs before dumping all 532bhp and 540Nm of torque through the all-wheel-drive system and pinning you to the seat. That pinprick on the horizon will scream past the window alarmingly quickly.

The light steering and wide stance make it a less-than-ideal companion for a back-road blast but, particularly with the optional Sport exhaust, it can still be fun at sane speeds.

Its party piece is how docile and easy to drive it can be when you're not stamping on the loud pedal at every opportunity. Use the Drive Select toggle to put the car in comfort mode and you'll cruise about unassumingly.

The only real negative for those more than six foot tall is that the roof mechanism intrudes into the cabin, making it more cramped than in the coupe. We highly recommend taller drivers try before they buy, as some of our road test team found the driving position unbearable.

The Audi R8 Spyder is not a sensible purchase. It's something that can only be justified by how it makes you feel in your heart, and for car enthusiasts that stunning, naturally aspirated V10 engine alone is worth the price of admission.

Add excellent build quality plus ludicrous performance and if you've got a spare £130k there's not much to complain about. To really make the most of this car you might need to add the price of another family hatchback in options, but for those at this end of the market that's to be expected.

Is it better than the coupe? If you're tall or want to enjoy your purchase out on track, probably not. But for those who want to cruise the open road, enjoying the sunshine and the sonorous soundtrack, the Spyder can't be beaten.