Halloween in England: Spooktacular things to do with the kids this half term 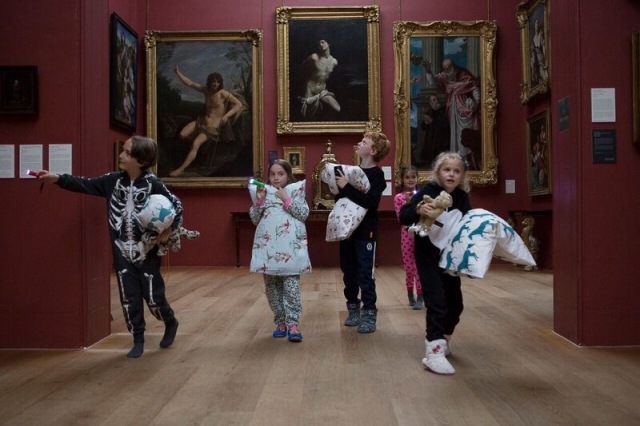 Halloween is just around the corner and this October half term (Monday 24 October to Friday 28 October 2016) there are plenty of ghoulish goings on and spooktastic days out and short breaks to enjoy as a family. We've picked some of the best things to do with the kids during the school holidays in England, from a night at a haunted gallery to swimming with sharks after dark...

Join a haunted sleepover at the Dulwich Picture Gallery in London

Pack up the kids' sleeping bags for a Halloween sleepover with a difference at the Dulwich Picture Gallery from 29 to 30 October. Little monsters can pay a visit to the on-site haunted house, interact with the paintings brought to life by mystery guests and create a vintage-inspired Halloween print to take home. Bed down for the night among the Old Masters and wake up to breakfast and a classic film. All children (suitable for 7 to 13 years) must be accompanied by an adult. £50 per person. 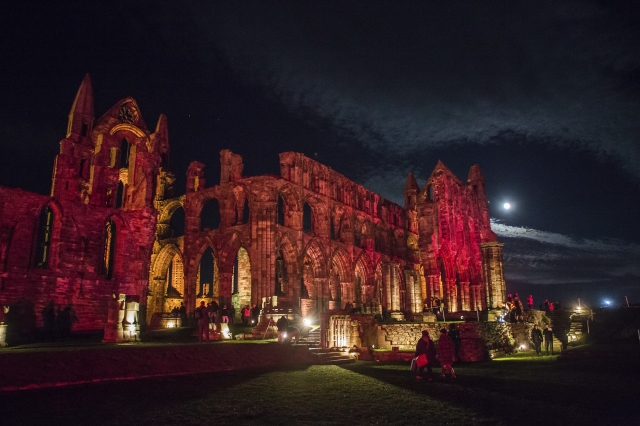 Have a fangtastic night out at Whitby Abbey in North Yorkshire

Discover the inspiration behind the gothic tales of Dracula at Whitby Abbey with frighteningly fun activities during the half term break. Visitors to the medieval church can join a scary storytelling session and travel along a spooky trail. During the evenings of 26 to 29 October families can see Whitby Abbey illuminated in colourful lights and hear dark tales of the sordid past. Make it a short break and stay at North Yorkshire Moors Caravan Club Site, set in the relaxing surrounding of the North Yorkshire Moors National Park, from £17.90 per night for two adults and two children. £23.40 per family for the Illuminated Abbey and £18.40 per family for Spooky Abbey events. 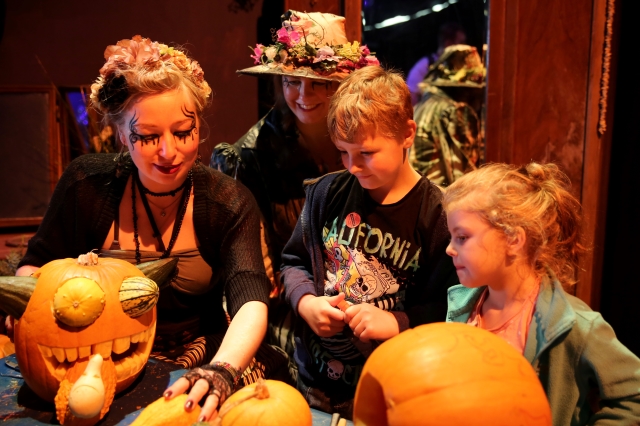 Roll up to the Eden Project's circus-themed spectacle in Cornwall

Visitors to the Eden Project will be spellbound by spooky illusions, magic shows and bubble wizardry as the spirit of the circus haunts Halloweden this half term (22 to 30 October). Expect pop-up performances, puppetry and ringmaster training, as well as bewitching owls and pumpkin carving. One of the big attractions will be the bubbleologist and magician the Bubble Wizard who will thrill audiences with his breathtaking bubble sculptures. Don't miss the Victorian flea circus featuring a troupe of minute stars, the Little Monsters' Ball on 29 October and a spine-tingling skate on Eden's ice rink. £62 per family of four for advanced tickets, Little Monsters' Ball and ice skating extra. 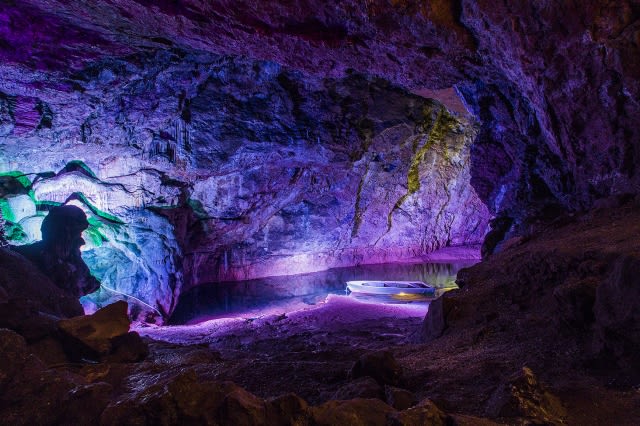 Meet wicked witches at the Wookey Caves in Somerset

Explore Somerset's mysterious Wookey Caves with a guided tour from ghosts and ghouls residing in the caverns this half term (22 to 30 October). Families will be greeted by the Wookey Hole Witch, before discovering the secrets of the famous caves. After touring the Wookey Caves, you can watch the Halloween circus show and children will have the chance to enter a fancy dress competition when they visit dressed as their favourite Halloween character. Just six miles from Wookey Hole, you can make a mini-break of it by staying at Cheddar Caravan Club, from £26.70 per night for two adults and two children. 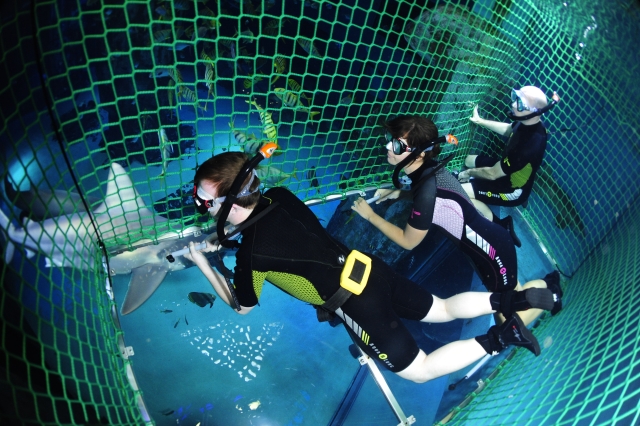 Snorkel with sharks in the dark at SEA LIFE London Aquarium

This Halloween, the exclusive Snorkeling with Sharks in the dark experience returns to the SEA LIFE London Aquarium from 27 to 31 October, offering would-be divers the chance to come face-to-fin with over 15 magnificent sharks after hours. The evening experience will see shark lovers submerged beneath the water in a mesh divers net, equipped with explorer-style red light torches to spot six species of shark in the eerie darkness. A transparent perspex floor will give clear views right to the bottom of the five-metre-deep display, where a bowmouth guitarfish and several nurse sharks dwell, while all around you impressive sand tiger sharks, brown sharks and sleek black tip reef sharks circle just feet away. Participants must be at least 1.3 metres in height. £180 per person. 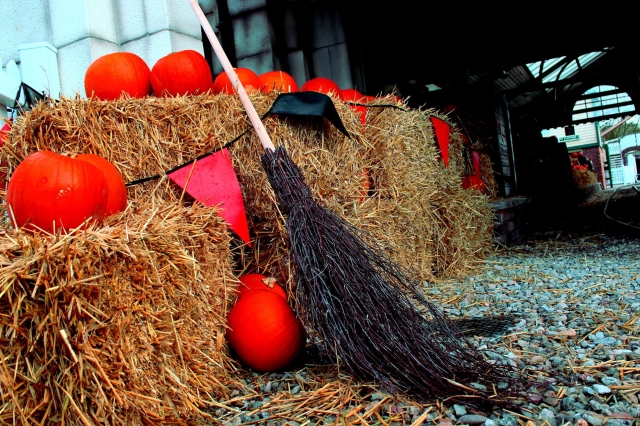 Dare to get spooked this Halloween? Then head for Drayton Manor Theme Park with the whole family (safety in numbers), but beware of a crack or the sound of footsteps behind you as you enter into some frightfully-fun activities in the park. From 15 to 30 October, Thomas Land will be transformed into the spooktacular island of Sodor, where little ones can explore Flynn's Fire Rescue and Toby's Tram Express, and uncover what's lurking behind Fat Controller's door. Meander through the haunted house for a scare a minute and get into the 'All Hallows' spirit as you take on The Haunting. From £59 for advanced family tickets.

With an extensive past of past residents, including royal visitors and prisoners, Carisbrooke has its fair share of haunting tales. Amon its ethereal inhabitants are a ghostly figure accompanied by four tiny lap dogs, who is often spotted in the courtyard of the castle, and the disembodied face of a tragic drowning victim reputedly visible in the well water.

Halloween happenings: Let the kids scare themselves silly this half term with creepy crafts, spooky activities and ghost hunting galore.

Built on the site of a bloody battlefield, paranormal activity and Battle Abbey have long gone hand in hand. Many visitors claim to have seen the figure of a monk gliding through the abbey, and shadowy figures have often been spotted within the undercroft and cloisters. When it rains, the battlefield appears to be awash with blood due to iron oxide in the soil mixing with rainwater...

Halloween happenings: Head to the Haunted Abbey event every day during half term for activity trails, ghost hunting and creepy crafts.

A turbulent history stretching back over 2,000 years has produced plenty of spooky goings-on at one of England’s most haunted castles. Look out for a mysterious lady in red and the tragic figure of a Napoleonic drummer boy  - just two of the spirits who roam within the walls of Dover Castle, while the labyrinth of underground tunnels provides numerous strange sightings and sounds.

Halloween happenings: The castle is running a Haunted Castle event every day during half term.

This magnificent building is the former home of Sir Charles Cavendish, and some say that ghost of the owner still likes to wander the halls of his restored fantasy mansion. Visitors and staff at Bolsover Castle have also reported the distinct aroma of horses in the empty former riding school, and experienced mysterious pinches or slaps from unseen hands.

Halloween happenings: Bolsover is giving visitors the chance to explore the castle at night on Fridays and Saturdays during half term, with the chance to wander the castle by torchlight and look for signs of previous residents…

A long history of military residence, siege and assault has left its mark on Carlisle Castle, where gruesome discoveries await and unexplained happenings often occur. A Grey Lady and the ghostly apparitions of various soldiers who have inhabited the castle through the centuries are among the spirits who appear to those who brave this fortress.

Halloween happenings: Join torchlight tours that
bring to life some of the creepy, gruesome and surprising tales during half term.

They say that the sound of horses' hooves can regularly be heard at this coastal castle, allegedly a legacy from when occupants were forced to slaughter their horses for food during Civil War siege. The sound of furniture being moved in an upstairs room has also been reported, and workmen once spotted a woman walking across Pendennis Castle when it was closed, only to find that she had then disappeared.

Halloween happenings: Spooky trails and ghost hunting adventures are taking place throughout the week of half term, as well as spooky tours.

As the inspiration for Bram Stoker’s Dracula, it's no surprise that these evocative gothic ruins contain their fair share of ghost stories. A coach pulled by headless horses has been seen travelling through Whitby Abbey before plunging off a nearby clifftop, and rumour has it that the abbey’s founder, St Hild, can sometimes be seen appearing in the upper windows of the ruins.

Halloween happenings: The abbey will be illuminated with coloured floodlighting from Wednesday 26 October until Saturday 29 October. You'll also get the chance to meet costumed characters and hear their gruesome tales.

This spectacular ruin once played host to many extravagant parties – and no-one is entirely sure that all the guests have gone home. Visitors at Witley Court have commented to staff about a gentleman peering out of an upstairs window, despite there being no floors, and the empty ballroom often echoes with the haunting music of a string quartet.

Halloween happenings: During half term, families can discover the rare and wonderful world of bats and take part in a fancy dress competition.
If you take a tour at Eltham Palace, be sure to check that your guide is among the living… it is said the spirit of a former guide sometimes takes groups for a walk around the grounds. Watch out for a royal encounter too – the Art Deco palace was built around Henry VIII’s boyhood home and regular visitors believe his presence still lingers.

Halloween happenings: Half term horrors include creepy crafts, a costume competition and pumpkin carving sessions.
Up Next