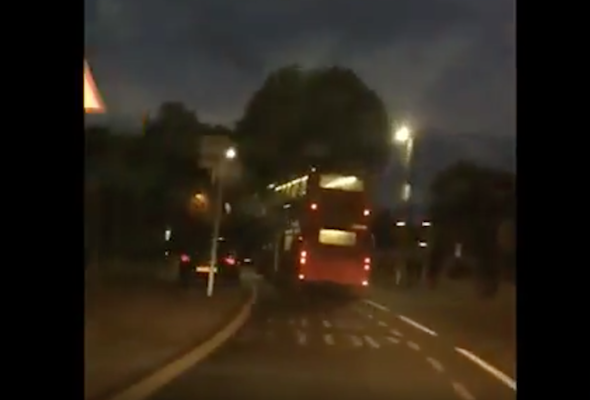 This is the moment a man who stole a double-decker bus went for a drunken joyride through Watford.

Deepak Malhotra, 35, was drunk when he spotted the bus parked in Watford bus station with its engine running while the driver went to the toilet.
He forced the locked doors open and drove away in the eight-tonne vehicle. Footage captured by another motorist shows the bus speeding, mounting kerbs and sideswiping parked cars during the incident in July.

He was later arrested in the street after stopping the £150,000 bus, which was a write-off. When tested he was over the limit with 91mg of alcohol in 100ml of blood – the legal limit is 80mg.

His lawyer said he had expressed remorse for his actions, which he blamed on being devastated by the breakdown of his marriage. He said Malhotra, of Edgware Road, London, pleaded guilty at the earliest opportunity on August 8.

Malhotra was already banned at the time and had 14 previous convictions for a total of 30 offences, including for drink driving.

He was jailed for a total of 21 months at Harrow Crown Court after admitting to aggravated vehicle taking, driving with excess alcohol and driving while disqualified.

In addition, he was banned from driving for three years and ordered to retake his driving test before he can get his licence back.

Sentencing him, Judge Fiona Barrie called it 'an atrocious and highly dangerous piece of driving'.