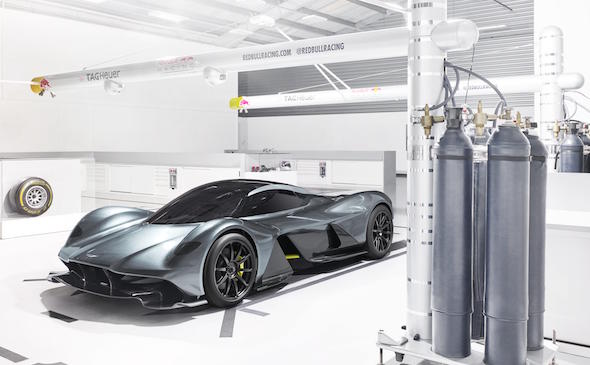 Rumours that Aston Martin was working with Red Bull Racing on a performance car had the automotive world intrigued for months.

Then, in July this year, the companies revealed the first look at the RB-001, their road car project. Its futuristic styling grabbed our attention, but it was the few technical details released that really caught the eye.
It will be built around a lightweight carbon-fibre structure and feature aerodynamics that offer 'unprecedented levels of downforce in a road-legal car'.

It will be powered by a mid-mounted naturally aspirated V12 engine offering a 1:1 power-to-weight ratio.

Officials remained tight-lipped about specific numbers at the time, but now Adrian Newey, Red Bull racing's chief technical officer and one of the most respected aerodynamicists in the Formula 1 world, has revealed some more information.

Newey says that thanks to utilising 'ground-effect' aerodynamics the track-only RB-001 will make up to two tonnes of downforce and hold 4G in a corner – that's four times the force of gravity, similar to that achieved by Formula 1 cars.

Aside from blowing minds with performance figures, Newey also revealed a few details about the car's availability. He said 175 cars would be built, with 150 made for the road and 25 for the track at a cost of around $3m (£2.4m) each.

It is expected to go on sale late next year.
Tags
Read Full Story Click here to comment